Waste On NJIT Campus: How To Deal With It

It’s a habit we don’t think about very much — we eat a snack, wrapped in plastic, or finish a box of pizza and throw the packaging in a trash bin. The container fills up to the point where barely anything fits into it anymore, and the next day, it’s empty again, ready to swallow more trash.

We should think about it more. Who’s taking care of all of our waste? What happens to it? Can we reduce it? 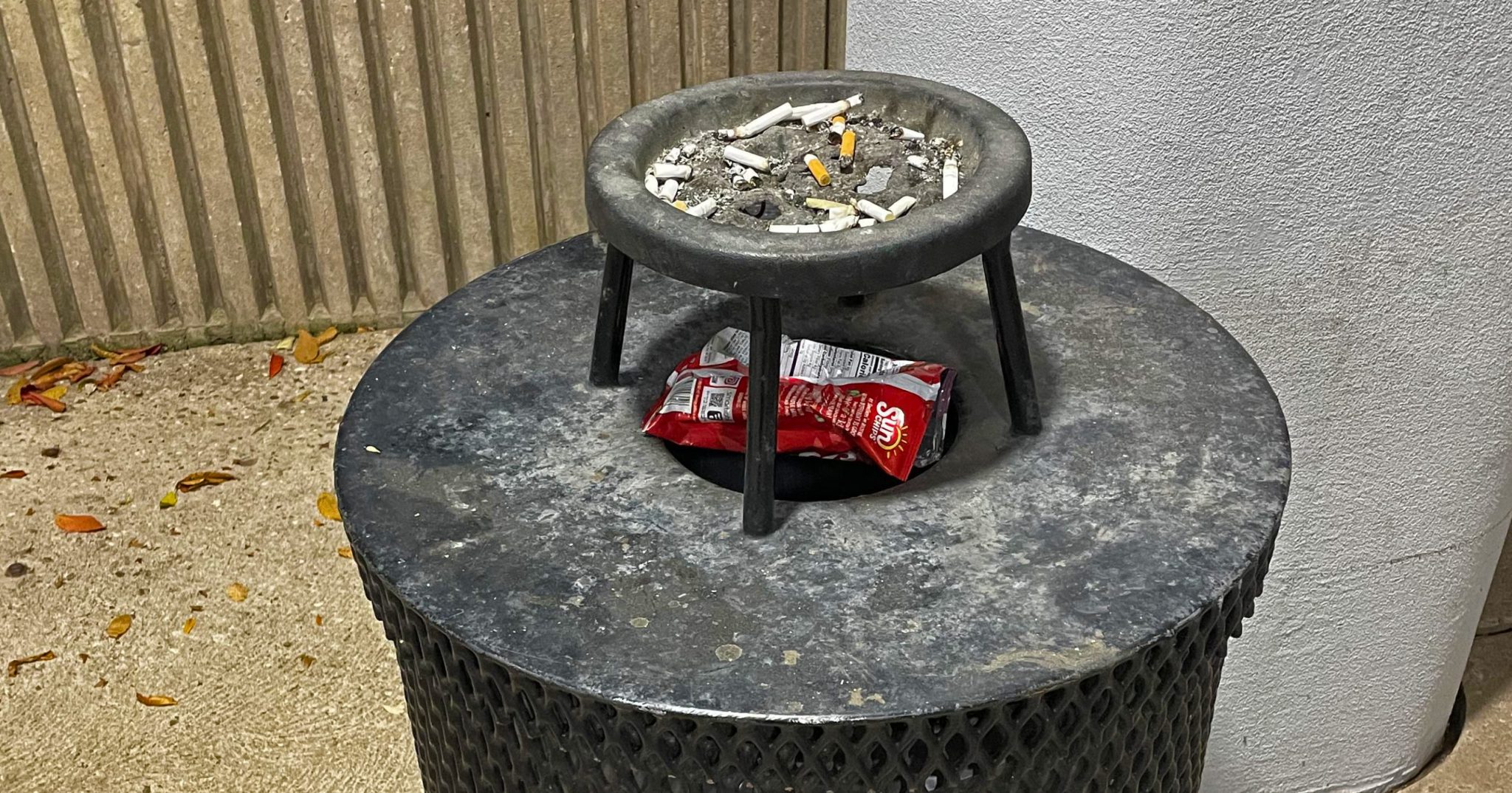 Henry Rzemieniewski, NJIT’s [New Jersey Institute of Technology]manager of custodial services, has a team of 52 people taking care of everything inside the buildings on campus: Emptying the containers, separating the trash, picking it up and cleaning offices classrooms and dorms are part of the team’s responsibilities. “We do our best to recycle,” Rzemieniewski said about the recycling system on campus. In order to achieve that, his team works two different shifts, one from 5:30 a.m. to 2 p.m. and another one from 1:30 to 10 p.m., always checking the trash bags’ contents before emptying and, if need be, sorting them.

The outdoor team managed by Richard Martinez consists of 13 staff members that pick up litter and empty trashcans around campus as well as collect the waste from inside the buildings once it has been brought outside by the indoor team. Some of the regular campus waste is burned at Covanta, a waste-to-energy facility in Newark; recyclables are shipped to China.

“On average, we have about 40 to 50 tons of total waste coming out from campus” and “about 20 to 25 percent of that is recyclables,” Rzemieniewski stated. This includes cardboard and any types of plastic, cans or bottles. For electronic waste, however, students need to contact the facilities team or the Office of Residence Life.

“For the most part, the right materials go into the right bins,” Rzemieniewski said. Even so, he has noticed people forcing regular trash into recycle containers, even though the hole was only as big as a plastic bottle, and a regular trash bin was right beside it. Rzemieniewski added that the tendency to dispose of waste improperly “is not an NJIT thing, but a state of New Jersey thing.” According to him, a culture change needs to happen – and people need to be more informed.

One way of doing that occurs through the student-led sustainability initiative NJIT Green. To minimize waste and wrongly recycled trash on campus and to spread awareness, they have started a recycling initiative. “We saw that items could have been recycled but were being put into trash bins and vice versa,” Public Relations Manager of NJIT Green Adelina Borissov said, explaining their motivation.

The paper Starbucks cups, for example, kept ending up in recycling bins even though they cannot be recycled. In response to that, NJIT Green had the black recycling bins replaced with blue ones to make it “much easier for the NJIT body to see where recyclable items should be put.” Before, all bins were black, making it harder to distinguish where to put the recyclables.

Food waste is another big factor in NJIT’s waste. As of recently, the Gourmet Dining Service collects its food waste separately. According to Rzemieniewski and David Arluna, food service director at NJIT, some of that waste is going to an organics facility in Newark after being put in separate bins outside and picked up by a company three times a week.

Arluna added, “Our biggest waste – and it’s not to knock on the students – is the students not eating the food.” According to him, there is not much food waste when preparing the food. Referring to the posters by the entrance of GDS illustrating the food waste problem, he mentioned, “We try to educate without educating them; [sometimes, it is better to] choose with your stomach and not your eyes.”

Because of GDS’ excessive food waste, NJIT Green started another initiative to compost food from the dining service. “After conducting waste audits in GDS back in 2018 and 2019, we concluded that students were generating about 300 pounds of food waste daily,” Borissov said. Volunteers from other organizations and clubs helped out with the composting initiatives every Friday during common hour. “We would show them what items to put in the bins that were going to hold our compost and what items to not put in,” Borissov explained regarding their process.

“I think that NJIT is recognizing that sustainability is important to our environment as a whole,” Borissov said, but there are still some improvements to be made, such as a permanent composting initiative. Not offering plastic bags on campus – which will be the case in half a year when the new law about retailers not offering plastic bags is in effect – and encouraging recycling and sustainability individually are a few other things Borissov wishes for.

“I am aware it can be overwhelming to think: ‘How can I, a single human being, make an impact towards a more sustainable campus?’” she admitted. However, there are simple things every student can do: getting reusable water bottles instead of plastic ones – same goes for bags to do shopping – and wearing a reusable mask, drinking from a reusable coffee tumbler and making sure to throw the trash into the right bins. “These are very small changes,” Borrisov concluded, “but any change towards sustainability is helpful and small changes can make a huge impact!”

This story was produced in collaboration with CivicStory (CivicStory.org) and the New Jersey Sustainability Reporting Hub project (SRhub.org). It was originally reported by Alicia Tedesco for The Vector, the independent student newspaper of New Jersey Institute of Technology, and may be re-distributed through the Creative Commons License, with attribution. Alicia Tedesco is an unpaid volunteer contributing to the NJ Sustainability Reporting project with this article, for which she received no compensation.

Waste On NJIT Campus: How To Deal With It