HAMMONTON—With the prevalence of plastic in virtually all aspects of life, there is an often unseen danger about which not much is known: microplastics.

According to Amy Menzel, the chair of the Hammonton Green Committee and the communications manager for the Atlantic County Utilities Authority (ACUA), microplastics are “tiny pieces of plastic—or bits of plastic—that are shed when bigger pieces of plastic degrade.” 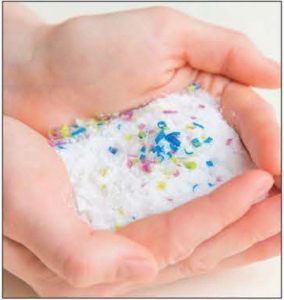 “Some of these tiny plastic pieces are too small to see and can be light enough to be carried by the wind over large distances,” Menzel said.

Menzel said that microplastics are found “all around us: in the air, water and soil.”

“It has been suggested that Americans alone eat or drink the equivalent of a credit card’s worth of plastic every week. We don’t know how much plastic passes through our systems or how it affects us,” Menzel said.

“Primary microplastics include microbeads which are created for a specific purpose. Microbeads were added to personal care products to exfoliate skin or to help polish teeth, and added to other products like compounds used in sandblasting to clean surfaces. When we shower or rinse our mouths, those microplastics go down the drain. From there, some of them will end up in our waterways,” Menzel said.

Secondary microplastics, Menzel said, come from larger pieces of plastic that break down in the environment.

“This happens when plastic litter degrades and breaks into smaller pieces. If you’ve ever done a cleanup and had a plastic bag fall apart when you grab it, you know that this is happening all over. Sunlight and weathering work to break these items down into smaller and smaller pieces,” Menzel said.

“If you had a site that had a bunch of litter and the plastic disintegrated over the last 20 or 30 years from wear, tear and weathering—that plastic’s not really gone; it’s just in smaller pieces and spread out further … Part of the plastic breakdown cycle happens onsite, so, if you’re using plastic mulch for weed control or for shaping your row beds, a lot of that gets pulled up—but not all of it. It rips and it stays in the soil, breaking down over time,” he said.

Menzel said that microplastics can enter the environment in other ways, as well.

“Roadways are another big source of microplastics that enter the air. Tiny pieces of plastic are shed from tires as we drive and make up almost 80 percent of atmospheric microplastics,” Menzel said.

Another common source of microplastics, Menzel said, is laundry.

“When we wash synthetic fibers like polyester, thousands of tiny plastic fibers find their way to our wastewater treatment plant, and dryer exhaust is loaded with microfibers. There are special filters that can be added to your washing machine and other products to collect fibers that shed from clothing items in the washer,” Menzel said.

Menzel said that much of the microplastics from drain water can be captured during wastewater treatment during either the initial screening process or the sedimentation process.

“Microplastics removed from wastewater are held in the biosolids that are removed during treatment. In our area, these biosolids are not applied to the land—in some places, they are used as fertilizer—so that reduces the impact of microplastics on our local soils. During tertiary wastewater treatment, the final filtration step in some treatment processes, additional plastics are captured and removed,” Menzel said.

This, Menzel cautioned, is “not a perfect process.”

“There is the potential for microfibers to travel in water through sandy soil and to make their way into the groundwater supply … We have produced over 6 billion tons of plastic since the 1940s, and even if we stopped making more tomorrow, this plastic is still out there. Microplastic contamination in both surface water and groundwater will be a problem for years to come,” Menzel said.

Art Galletta, co-owner of Atlantic Blueberry Co., said that plastics are prevalent in his industry.

“We get a lot of stuff that’s in plastic jugs or five-gallon pails. A lot of stuff is coming in plastic. … The irrigation fertilizer comes in big pallet containers,” Galletta said.

Unfortunately, Galletta said, many growers have no control over the containers in which they receive their products.

“We have to use what they send, and hopefully they’ll figure out something better to send it in. I don’t know how quickly things will change, but there’s a lot of pressure on plastic … I’d have to imagine the manufacturers are working on that,” Galletta said.

Some plastic uses cannot be avoided—both Simmons and Galletta said that their farms, like many others, utilize plastic tubing for irrigation—but Galletta said that members of the blueberry industry are trying to come up with alternatives to plastic in other ways.

Recycling is one way to reduce plastics and microplastics, Menzel said.

“A lot of plastic does not get recycled. Recycling prevents plastics from ending up littering the environment,” Menzel said.

Galletta said that the blueberry industry is working to increase recyclability of their products.

“Some of the things we’ve been fooling around with make them even easier to recycle with a label that can be recycled along with the clamshell. Little things like that, but each little step makes a different,” Galletta said.

“We make a concerted effort to not use plastic, and the plastic we do use we try to actually reuse it rather than just recycle it,” Simmons said.

One method they utilize is through reusable, rubber egg flats.

“Some of our older ones are plastic, but we’ve tried to move to a rubberized material that’s reusable. Eventually, though, it’ll end up in a landfill. We went back and forth even with our recycled pulp egg cartons for our single, point-of-sale stuff, but for our wholesale customers we’ll give them a flat and they give us the flat back so it’s reused over and over again,” Simmons said.

Simmons said that Thin Place Farm is also investigating the possibility of reusable egg cartons, though they are not without their challenges.

“They’re kind of expensive and they’re hard to clean—so you use a lot of resources cleaning them—and eventually something’s going to break, like the clip or something, and it’s going to end up back in a landfill. We went with recycled paper pulp egg cartons to try to avoid plastic there,” Simmons said.

Simmons said that his farm receives its feed in bags that are made from a nylon/plastic weave, which get reused onsite.

“When I open up the feed bags, it has the self-pull string, and when you pull it apart little flakes of plastic come off, and I don’t want that all over my property. I try to be cognizant of where I open it, and I try to keep it all in my pocket until I can dispose of it … I repurpose some of them—I collect pine needles to use for the smoker for the bees, so they make good storage bags,” he said.

Additionally, Simmons said that Thin Place Farm has removed plastic from its weed control, and uses no synthetic materials for other aspects of agriculture.

“What we use are cover crops, and we use wood chips. That’s our primary control for holding moisture and for weed preventative. We don’t use plastic for that. We do hand-weeding, flame-weeding and we mulch really heavy … We don’t add any external input for fertilizer. We use the cover crops and the mulch; no synthetic insecticides, herbicides or fertilizers,” Simmons said.

Atlantic Blueberry Co. is also investigating an expansion of their organic fields.

“We’re looking at it. They did pretty well this year, and we found feather meal being a better source of nitrogen. The problem is getting enough nitrogen to them to get a yield, but we’re working on it,” Galletta said.

Menzel said that research into the effects of microplastics and methods of their reduction is an ongoing effort.

“There is still a huge amount of research that needs to be done, and it may feel like there are more questions than answers right now. Microplastic pollution may be one of the most widespread and possibly long-lasting changes to the surface of our planet caused by human activity. Scientists recognize the importance of this, and research into the impacts of microplastics pollution is increasing,” Menzel said.

In the meantime, Menzel said that one effective way to reduce plastic pollution is to use less of it.

“Switch from single-use plastics to reusable items, and look for natural alternatives to substitute for plastics—like plant-based materials that are biodegradable or natural fibers like cotton, linen or wool for your clothing. One easy way to reduce plastic consumption is to cut out bottled water, and to refill your reusable water bottle with tap water. This is an excellent way to save money and reduce waste, too. We have great water; we’re very fortunate,” Menzel said.

Additionally, picking up plastic litter can greatly reduce the potential for microplastics.

“When someone dumps plastic somewhere, it may eventually break down into microplastics. Pick up litter before it does. This is an important step to break the cycling of plastic through the environment, and one that everyone can help with. Look out for community cleanups, or adopt a road through our county or municipal Clean Communities programs … You can contact the Green Committee to get involved with local cleanups,” Menzel said.

This story was produced in collaboration with CivicStory.org and the NJ Sustainability Reporting (SRhub.org). It was originally reported by Joseph F. Berenato for The Hammonton Gazette, and may be re-distributed through the Creative Commons License, with attribution.