Hammontonians are connecting with nature and learning more about their environment by using the iNaturalist app on their smartphones. 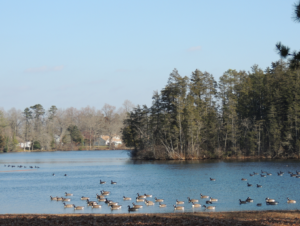 Canada geese swim at the Hammonton Lake. The Canada goose is one of the species observed and identified on the iNaturalist app. (Photo credit: The Hammonton Gazette/Kristin Guglietti)

Environmental Commission Chairman Dan Bachalis created the Hammonton New Jersey Species Survey about two years ago after he discovered the iNaturalist app, which helps identify species. iNaturalist is a joint initiative by the California Academy of Sciences and the National Geographic Society.

“For somebody who wants to go out and see what’s around them and identify things and learn about their environment, it’s one of the best apps you can get. It’s absolutely free, [and] easy to use,” Bachalis said.

Councilman Jonathan Oliva said his use of the iNaturalist app was from Bachalis’ recommendation.

“He’s kind of the iNaturalist guru and he’s the one who’s gotten me started on it,” Oliva said.

“It’s a social network that allows you to share species and various biological information between users, and it helps individual users become more educated about nature,” Oliva said.

How the iNaturalist app works is someone takes a photo or photos of a plant, fungus or animal species they can or can’t identify, the photos are uploaded on the app, and then other users can help identify the species. The app will also suggest what it could be.

The iNaturalist app allows people to participate in a variety of projects around the world.

“We created one specifically for Hammonton so folks can identify what they’re seeing on their property or around town in the park, in the forest or whatnot. It automatically becomes part of the Hammonton Species Survey,” Bachalis said.

As of press time, the Hammonton Species Survey has 821 observations, 451 species, 316 identifiers and 75 observers.

Species with the most observations in the survey include Fowler’s toad, monarch butterfly, ghost pipes, lone star tick, spotted lanternfly and gray treefrog.

In the Species Survey, there are five observations of the lanternfly, which is an invasive species.

“Spotted lanternfly has certainly been spotted. There is also the spotted lanternfly’s food that it likes. It’s called the tree of heaven. That is also a tree that is not indigenous to here. It kind of looks almost like a fern, but it is a tree,” Oliva said.

Bachalis said the tree of heaven is a non-native species from Asia.

“It grows very rapidly. It out-competes other plants in the area where it’s growing. It grows by seed. It grows by spreading its roots out, [with] runners under the ground. It’s really an obnoxious, invasive plant and it’s the host plant of the spotted lanternfly. If we can eradicate tree of heaven in the area, we probably won’t eliminate spotted lanternfly because they’re a really opportunistic pest, but we can at least begin to control it,” Bachalis said.

“If we want to go back and see it ourselves if it’s a plant or if it’s something we want to root out like tree of heaven, we can go and do that. Other things like birds, mammals and things you get a shot and they’re off somewhere else,” Bachalis said.

For threatened or endangered species, however, people might not want to pinpoint the exact location, to prevent damage to the area that it’s living in.

Bachalis said he hasn’t done a detailed analysis whether any species is threatened or endangered in the Hammonton Species Survey but could provide a report at another time.

“If we found a threatened or endangered species, we are in a Pinelands area, so we have a very good rapport with the DEP [Department of Environmental Protection] and Pinelands Preservation Alliance. If there was some recommendation from them to help us protect a threatened or endangered species, we most certainly be interested in helping to do that,” Oliva said.

The NRI is a document that helps guide development in town, so developers don’t build in sensitive areas with threatened or endangered species. The NRI can be obtained from the town hall.

“And once town council gives their formal approval of the document, we’re going to upload the inventory to the town website definitely under the Environmental Commission tab, [and] hopefully under the Joint Land Use Board tab so that people can download that easily enough,” Bachalis said.

One difference between the NRI and the iNaturalist app is that the NRI is not interactive.

“The Natural Resource Inventory identifies various species living in our area generally, but the listings aren’t based on actual observations in Hammonton in particular. They’re more general to the Pine Barrens, but the Hammonton New Jersey Species Survey is specific to Hammonton. It gives us a way of checking on what we’re actually seeing here in town,” Bachalis said.

Oliva encourages everyone to download the iNaturalist app if they are interested in learning more about the “makeup of the biodiversity in our community.”

“You might also connect with a couple people in the community that you never thought you would,” Oliva said.

For more information about the Hammonton Species Survey, visit inaturalist.org/projects/hammonton-nj-species-survey or download the iNaturalist app.