Thrifting Trend Among College Students May Help Save the Planet

Buying clothes at thrift stores has become more popular among college students in recent years, even though many young people don’t realize how this habit can help save the planet. 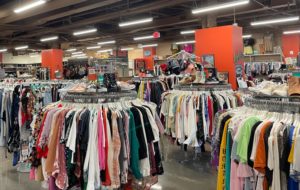 While it used to be seen as a choice for low-income and older people, the increase in thrifting for Gen Z and younger can be attributed to several factors, including social media. Apps such as Tiktok, Youtube, and Instagram all have flashy videos of students showing off vintage items from their last thrifting haul.

The demographic for thrift stores has shifted to include undergraduate and high school students who are looking for a quality retro jacket or a rare style of jeans. At a thrift store, they can get items at a fraction of the price they would pay at a retail store. Recently, the younger audience has realized that thrifting is a cost-friendly way to expand their wardrobes with staple clothing and one-of-a-kind statement pieces. Now, it is viewed as an exciting activity to take part in with friends.

Fashion resale might seem like an unlikely industry to flourish during a global pandemic, but the internet thrift store ThredUp, for example, has seen a 31 percent increase since the first COVID-19 lockdown. 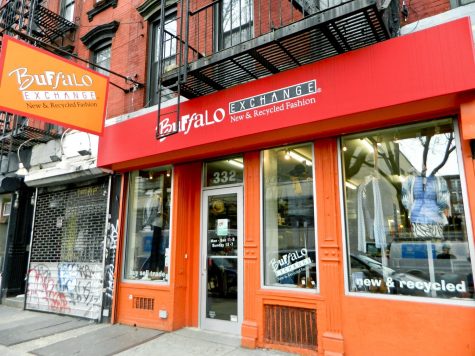 But while students may be thrifting solely because it is popular, experts say it is a trend that should be cultivated and continued because of the environmental impact. Thrifting is a practice that leads to less waste and can even guide people into buying less.

Aarian Frye from the thrift store chain Buffalo Exchange said, “Back when we first started in 1974, we had more of a niche customer base and there was more of a stigma against secondhand clothing. These days, though, secondhand shopping is becoming the norm and, in many cases, preferred to buying brand-new because of the wide variety of clothing available and the affordability.” Frye said that thrifting has no downsides because it allows thrifters to keep up with the latest styles while simultaneously reducing levels of textile waste that often ends up in landfills. Buffalo Exchange has 43 stores in the United States, including 6 locations in New York, where customers can buy, sell, or trade clothing.

According to Frye, thrifting is more than a passing trend, as it has environmental benefits: “The fashion industry accounts for about 10 percent of global emissions and tons of clothing ends up in landfills every year. Moving towards sustainable practices like thrifting and upcycling clothing is a great way to keep clothing out of landfills and combat environmental pollution since buying secondhand reduces the carbon emissions and water waste that comes with producing new clothing.”

Fast fashion, while considered convenient, wastes great amounts of packing material and fabric. The existence of fast fashion, along with the fashion cycle, pressures people to purchase excessive amounts of clothing. Much of it is thrown away after being worn once or twice since it is generally low quality. Clothing that people give to thrift shops has likely already withstood several years with the original owner without becoming damaged. As a result, thrift store items are usually more durable. Besides, most thrifters know to select well-made items.

On the other hand, thrifting can be a hard habit to keep up with since it’s more difficult to find items in the right size, and not everyone lives near a thrift store with low prices.

James MacKinnon, the author of the book The Day the World Stops Shopping, said “Thrifting itself is not enough, but it can be effective if it’s moved in certain ways. If the trend of thrifting pushes us towards a culture where it’s more acceptable to wear older clothing [and] it’s possible for us to hang on to clothing for a longer period of time, not participating in the constant acceleration of fashion cycles… that would have an impact.”

MacKinnon said that if people want to reduce their impact, they have to consciously purchase fewer items. “If people combine thrifting with reducing the number of articles of clothing they are buying, that would make a difference. If people focus on buying durable thrifted clothing as opposed to disposable thrifted clothing, that would make a difference because they could keep them for a longer period of time.”

It appears that young people have to do their own research or ask some savvy friends to understand how to approach thrifting and its environmental effects. But, are people thrifting because they think it is good for the Earth, or do they simply want to take advantage of low prices and follow their peers until the next clothing trend?

New Jersey City University (NJCU) junior Gabriel Petruziello said he has brought some of his own clothes to thrift stores and also said he had seen his friends thrifting and wearing second-hand clothing. Petruziello was asked whether he believes students are thrifting for the long-term due to environmental concerns, or whether he thinks it is a temporary fad. Petruziello said, “I try to stick to it, but I don’t really know about other people. I hope they do.”

Why is Thrifting Good for the Planet?

Thrifting is an environmentally conscious habit for several reasons. Sold in retail stores and online, fast fashion requires a large amount of energy and plastic waste to produce, sell, and internationally transport new, identical items of clothing. Some of the energy used to produce these items are non-renewable resources, which often leave the environment worse off. Thrifting is a much greener option since it doesn’t directly promote the creation of new materials.

In addition, when people choose to thrift, fewer chemical pollutants are created. Goodwill’s website says, “When it comes to clothing, textiles need to be grown using pesticides, and then those fabrics are treated with harsh chemicals and dyes that can be not only harmful to the environment but also to our health. When we create synthetic fabrics, greenhouse gases are released which contribute to climate change. These chemicals contaminate our water, soil, and air, and this can impact wildlife and the quality of many resources we use to survive”.

Such chemicals are harmful to animals and humans because of bioaccumulation. When plants and animals we may eat are contaminated by chemicals, we end up with a greater amount of those toxins in our bodies.

When asked how he feels about people giving up their sustainable behaviors after trends are over, Petruziello said, “I’m scared about the future of the Earth. More could definitely be done, we just need to stick to good habits.”

Young people may eventually abandon their thrifting habits because they don’t recognize the environmental benefits. They also may not see the need to consume less, especially when they are constantly pushed to consume more. MacKinnon said, “Really powerful forces compel us to consume, including the fashion cycle, advertising, the global production of goods that make them gradually become cheaper. At this point, the most important thing is education and stirring conversation about how consumption itself is a problem.”

Mass consumption is the greatest threat to the planet currently. MacKinnon said that it is crucial for young people to make a movement out of the issue. This begins with research and small groups of people committing to making greener choices daily. It snowballs into organizations pushing for widespread change. Young people need to write about it, discuss it with friends, and use social media to spread awareness, educating their peers.

“It is really good to see that there are signs that this generation may be one that brings the issue of overconsumption back to the table since it is the biggest driver of our environmental crises,” MacKinnon also said. The issue is how the information will be given to young people, who could work together to accomplish this task.

To avoid environmental collapse, environmental experts and common people alike agree that drastic change is necessary. Many are beginning to see the reason for switching up their daily habits. If one person can convince a handful of others to consider thrifting and how to practice it in an environmentally conscious way, then others may begin to do the same.

The Gothic Rack: The Gothic Rack provides professional clothing options for NJCU students, both slightly used and unused, for special events such as interviews, work, and careers fairs. It is located in GSUB room 211. More information can be found on the NJCU website. 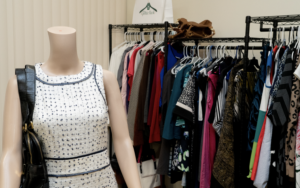 Thrifting Trend Among College Students May Help Save the Planet