After two decades of advocating for native plants in Montclair, local environmental activists are hopeful they will soon see the fruits of their labor.

On Tuesday, the Montclair Township Council is expected to hold a first reading of The Jose German-Gomez Native Species Act, mandating 70% of all new plantings, bushes and trees on public property be native to New Jersey. The act is named for the founder of the Montclair Backyard Habitat Project and Northeast Earth Coalition (German-Gomez is also author of Montclair Local’s “Gardening for Life” column).

If the act is passed, Montclair would become the first municipality in New Jersey to have a comprehensive native plant procurement ordinance, according to Councilman Peter Yacobellis, who wrote the ordinance with German-Gomez. 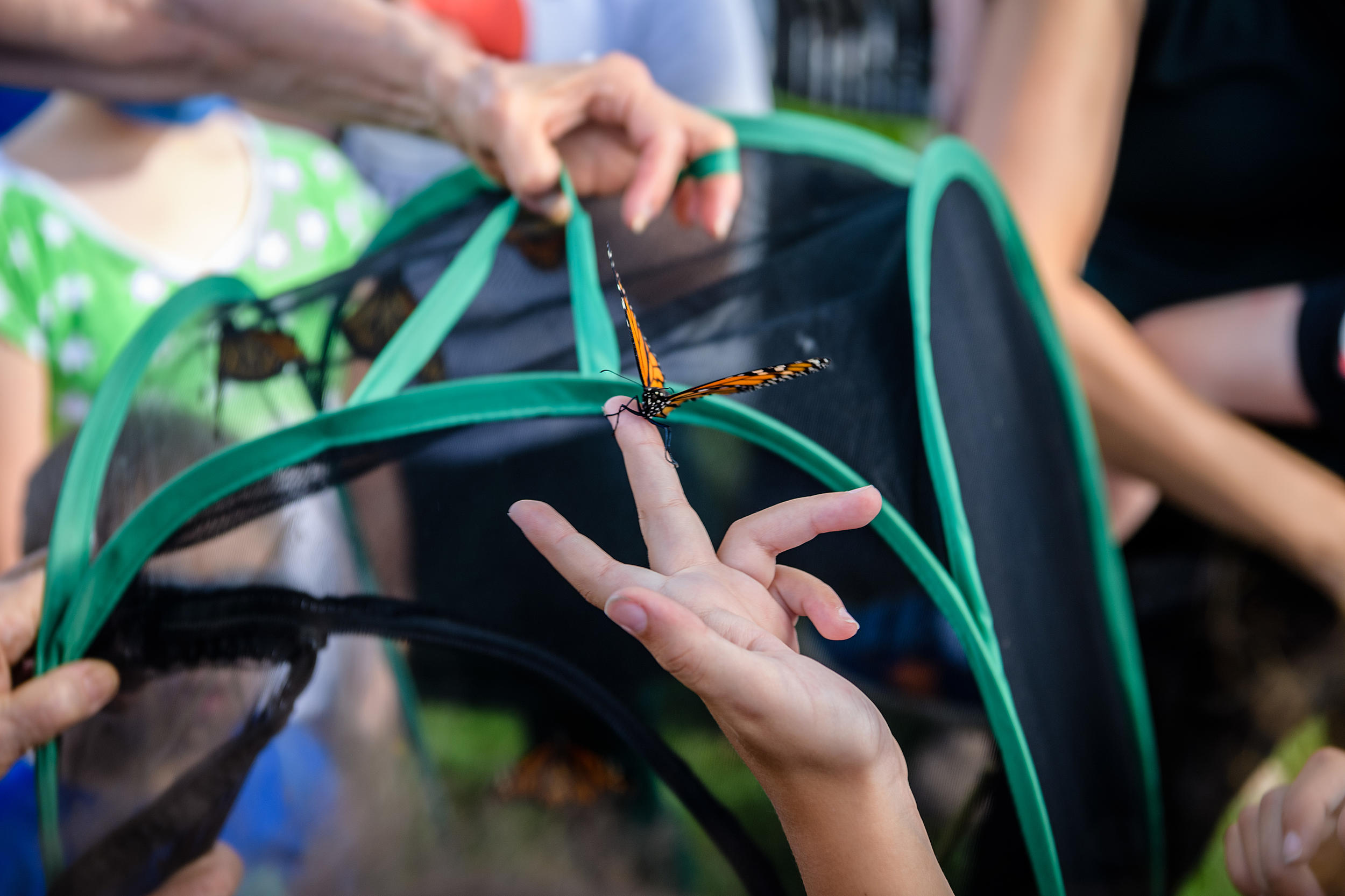 A monarch butterfly was released during The Northeast Earth Coalition’s annual Monarch Butterfly Event in August 2021. The coalition’s advocacy for native plant species, such as milkweed, the food for Monarch caterpillars, has culminated in the proposed Jose German-Gomez Native Species Act. (Neil Grabowsky/file photo)

Native pollinator populations have declined sharply over the last few decades, German-Gomez said, citing several studies and scientific publications. The decrease has been caused by the widespread use of pesticides, loss of habitat from development and an insistence on non-native plants in landscaping, he said in a shared statement with Northeast Earth Coalition Board of Directors Chair David A. Wasmuth (also a columnist for Montclair Local).

“The more native species we can plant in Montclair, the more of an ecosystem we can sustain in terms of pollinators in town,” Yacobellis said at the Council’s March 15 meeting. “It seems like a small thing, but these small things add up, and we can restore habitats for natural pollinators in our area.”

Around 90% of native butterflies and moth species can only reproduce on native plants, the ordinance says. And the declining numbers of these plants means Montclair and the rest of the world are facing a biodiversity crisis, it says.

One solution, according to the statement by German-Gomez and Wasmuth, is to act locally.

“As the climate crisis accelerates, the need to throw a lifeline to struggling wildlife and the threatened native ecosystems they depend on becomes more urgent by the day,” the statement says. “We can act strategically to reduce the impact of climate change in our community, but we need to begin planting now.”

Acting locally is nothing new for German-Gomez, Wasmuth and other community members invested in Montclair’s ecosystem.

In 2008, Montclair became the first National Wildlife Federation-certified Community Wildlife Habitat in New Jersey. This was the result of five years of work on the Montclair Backyard Habitat Project, part of the National Wildlife Federation’s Garden for Wildlife program, encouraging homeowners to manage their properties with the goal of maintaining healthy and diverse animal habitats and ecosystems, according to a Montclair Local column by German-Gomez.

In 2020, the township joined the Northeast Pollinator Pathways, a project that aims to connect pollinator projects to create corridors stretching from Maine to Virginia. There are more than 20 locations in Montclair recognized as official Monarch Waystations. For four years, the Northeast Earth Coalition has also hosted the Monarch Butterfly Event, raising awareness of monarch migration and the importance of planting native plants.

The work of the Northeast Earth Coalition and local activists is visible in Montclair, and the community is educated about environmental issues and ready for the ordinance, German-Gomez said.

“We have been advocating for native plants for the past 20 years here,” German-Gomez said. “I think it’s about time.”

The act would require at least 70% of newly procured plants (shrubs, groundcovers and flowers) as well as 70% of trees used in public places be native. Non-native plants would be permitted in community vegetable gardens, lawns and athletic fields, and planters and pots in Montclair’s business districts, under the ordinance.

In an annual memo to the Township Council, the Montclair Environmental Commission would review exceptions and the procurement percentages.

A previous draft of the ordinance required 100% of plants and 98% of street trees be native. But after speaking with several community and environmental groups, the percentages were reduced, Yacobellis said.

“The best we could do from a procurement perspective was 70% just because we already have existing contracts,” Yacobellis said. “We can’t immediately put in place something that requires us to purchase something that the suppliers we’re in contract with may not have.”

But recently enacted legislation—the Jersey Native Plants Program—will increase the availability of native plants, German-Gomez said. The program promotes the sale of native plants at retail garden centers and nurseries. Consumers will be able to identify plants that are native with a “Jersey Natives” label.

German-Gomez said he suggested a 3% annual increase in procurement, to mirror the increase in the availability of native species as the industry grows. But Yacobellis recommended a different route to increases – in reviewing procurement percentages each year, the Environmental Commission will also make recommendations for changes, he said.

“I like the idea of it being a little bit more dynamic,” Yacobellis said. “Getting more real time feedback, real time data, real time information, to allow us to make changes as the marketplace evolves versus just having an annual increase each year.”

“Montclair would not be alone in this effort,” German-Gomez and Wasmuth said in their shared statement. “Among other towns, both New York City and Philadelphia already have ordinances in place requiring the use of native plants and trees in public spaces. Montclair has just missed its chance to be … New Jersey’s pioneer; Eatontown passed a similar native plant ordinance in March.”

Eatontown’s ordinance applies to the landscape design of development applications.

German-Gomez and the Northeast Earth Coalition are in talks with officials in several other municipalities about a native plants ordinance –  among them the neighboring towns of Glenridge, Bloomfield, Clifton and Verona.

“Maybe they will not approve it in every town,” German-Gomez said. “But if we have a couple, or three, that is something, because we are amplifying their faith of having an ordinance for native plants.”