HOBOKEN, NJ — When it comes to environmental stewardship, knowledge is power.

After examining the issue further, students at All Saints Episcopal Day School believe education may be one of the best ways to encourage Hobokenites to ditch plastic water bottles, plastic straws and plastic utensils for good.

As part of a several-month-long action research project, Bridget Shouvlin’s fourth grade class launched a survey to learn more about the city’s plastic use habits, inviting residents, schools and businesses in Hoboken to weigh in. 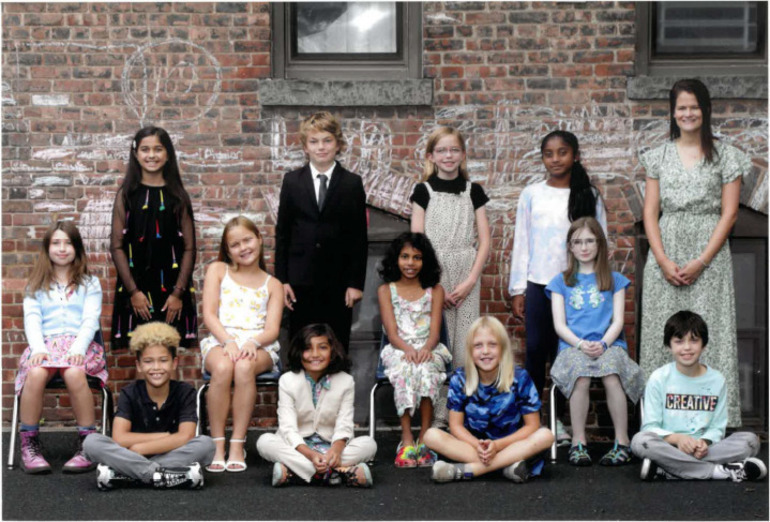 After analyzing their findings, Shouvlin’s class appeared in May before the Hoboken City Council, where they presented the results and delivered recommendations on steps Hoboken can take to become even more environmentally friendly.

The students ultimately found that while most residents want to become more sustainable, they may need some more guidance on the best ways to do it.

Olivia, a student, said, “I was surprised by some of the answers, but also surprised by just how many people are supportive of a ban on plastic items.”

One of the biggest takeaways, said Leo, a student, is that only 7% of city residents are aware of the Hoboken Hydration Station Program, an initiative launched by the Hoboken Green Team to cut down on the amount of single-use plastic water bottles in the Mile Square City.

As part of the program, businesses, such as Northern Soul, West Elm and Finnegans, allow people to refill their reusable water bottles for free. Participating businesses have a “Hoboken Hydration Station” sticker in storefront windows and a full list is available online.

Leo said students think it is a great program and needs to be promoted more.

“We also suggested that they [the city council] install water filtration at the parks…it would help us not buy plastic water bottles when we are out,” Leo said.

Continued outreach on how to properly recycle is also important, they said.

As part of Hoboken’s Climate Action Plan to achieve carbon neutrality by 2050, the city switched over to dual-stream recycling in 2020, a move officials said would reduce a share of the city’s landfill waste and save taxpayers about $200,000 in annual recycling costs.

During the rollout, Hoboken made several resources available, including video public serve announcements as well as free access to Recycle Coach, an app provided through the state that helps residents learn about recycling in their community and lets them search for details on materials that are recyclable locally.

The city also conducted outreach at various events, like the Fall Arts & Music Festival, Harvest Festival, weekly Farmers’ Markets, at Stevens Institute of Technology and in lobbies of large buildings. It also connected with property managers.

Still, recycling can be bewildering and little questions (Should I recycle the bottle and throw away the cap? What do I do with this pizza box?) can stump anyone. It doesn’t help that in New Jersey, different municipalities accept different recyclable materials, leading to varied rules across the state.

It’s not just confusing in the Garden State. Research has found that 94% of Americans support recycling and 74% believe it should be a top priority, Unfortunately, only about 35% of people across the country do it, with the majority citing uncertainty and inconvenience as the reasons why they opt to dump everything into the trash bin.

Doug O’Malley, director of Environment New Jersey, a New Brunswick-based policy and action group, pointed out that while “people adapted pretty well” to sorting out recyclables there hasn’t yet been shift to a “permanent recycling culture.”

And recycling rules “are never easy,” especially after 2018, when so many communities in New Jersey began utilizing dual stream, a process that “asks residents to have a degree of consciousness” and “do their homework at the kitchen sink,” O’Malley said.

Accelerating change, he added, is a responsibility that must be shared between several stakeholders, including government, municipalities and businesses.

Both O’Malley and the students said they believe it’s important for ongoing local recycling education to help residents better understand local recycling requirements and the importance of keeping recyclable materials clean and free of contaminants.

Riva, a student, said, “If they know what they could recycle, it would actually get recycled. Then, people would start recycling more and it would get more attention.”

Countywide, there has been a similar trend. In 2019, Hudson County’s rate fell to 48% after holding steady at just under 60% the previous two years.

And while New Jersey — which was among the first states to enact a mandatory recycling law 30 years ago — has one of the nation’s highest recycling rates (56%), there is still room for improvement.

When it came time for the students at All Saints to brainstorm ideas last fall for a project in which they could investigate a problem and then try to find ways to solve it, the impact of Hurricane Ida was still fresh in their minds.

After remnants of the storm pummeled the metropolitan area Sept. 1, the record rainfall caused some of the worst flooding in Hoboken since Superstorm Sandy in 2012.

Living in a waterfront community “made us think more about the water and what’s happening with that,” said Xavier, a student. “And, we started thinking about plastic and the impact that has had on the community.”

While the project showed the class just how harmful plastic is for the environment, Eesha, a student, said the knowledge has empowered them.

“I know, as a class, we have made a big change in our community,” he said. “And, I know the city council will definitely take our ideas into consideration. It does feel like we did something good for Hoboken and to really help the environment.”

The students admit to being nervous before presenting at City Hall last month.

“They are some of the most important people in Hoboken,” Issy said of the city council.

But, they were also eager to share what they learned over the past several months. 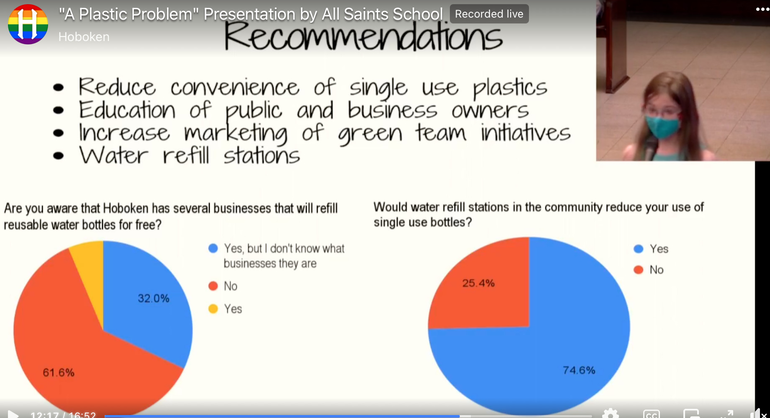 Miles, a student, said it was “exciting” because they could potentially “make an impact” in their home community.

Bridget, their teacher, described praised her class of 12 for their poise and professionalism.

“I think most adults would be nervous in that situation, so the fact that they did it as 4th graders is impressive,” she said. “I also appreciate how seriously the city council takes their work.”

Councilwoman Tiffanie Fisher also applauded their efforts, saying, “These kids are inheriting the world we give them, so at the very least, we need to listen to and follow their ideas.”

“I personally loved the idea of water refill stations to eliminate bottled water,” Fisher said. “It also has the advantage of making drinking water easily available to members of our community while they are outdoors.”

Councilwoman Emily Jabbour said, “I loved the presentation…[and] I so appreciate how thoughtful the recommendations were — all very well researched and couched in practical solutions.”

She went on to say, “I know that historically these presentations have informed policy changes and I have no doubt that the Environmental Services Subcommittee will consider whether there are action items for the Council to take up in the future.”

Back in 2014, the idea of a plastic bag ban partially originated at All Saints. After students began researching the harmful consequences of plastic bags on the environment, they called on the city council to prohibit them from use.

Four years later, Hoboken became one of the largest municipalities in the state and the first in Hudson County to put a ban into effect.

A statewide ban —which is one of the strictest in the country — went into effect May 4, prohibiting single-use plastic carryout bags, polystyrene foam food containers and paper bags at large grocery stores. Straws are not banned, but, as of November 2021, food establishments can only give one out if the customer specifically requests one.