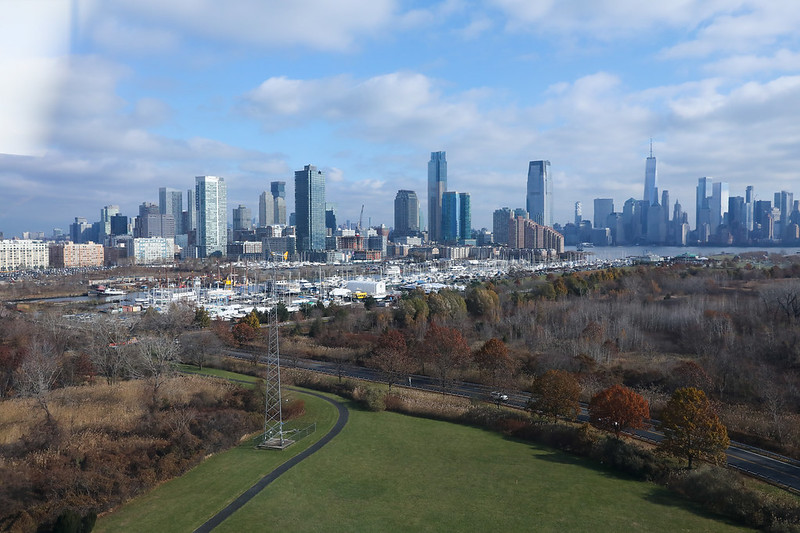 More than 100 people packed a public hearing held by the Senate’s environment committee in Trenton on a bill Sen. Brian Stack (D-Hudson) introduced last week that would direct a 17-member task force to develop a long-term master plan for the 1,200-acre park in Jersey City.

Critics have decried the fast-tracked bill as a poorly concealed overture to Paul Fireman, the politically connected billionaire who wants to expand his neighboring Liberty National Golf Course. Attorney Nevins McCann, who represents Fireman, stood at the ready Thursday to answer legislators’ questions during the hearing. 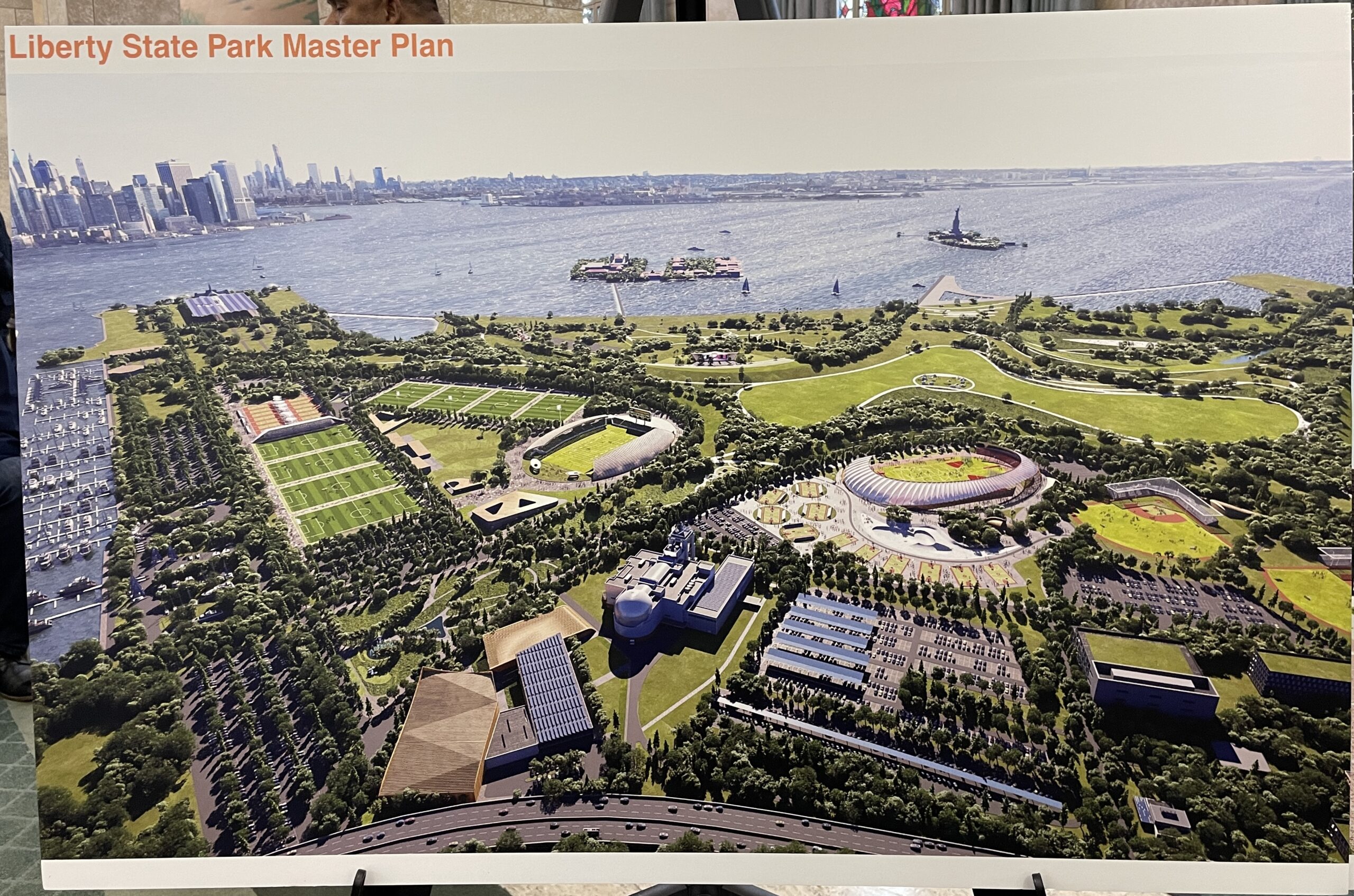 After more than two hours of testimony, committee members made several concessions critics wanted to ensure public participation in the process and bar some development, such as a casino. Fireman has previously proposed building a casino on the golf course property. 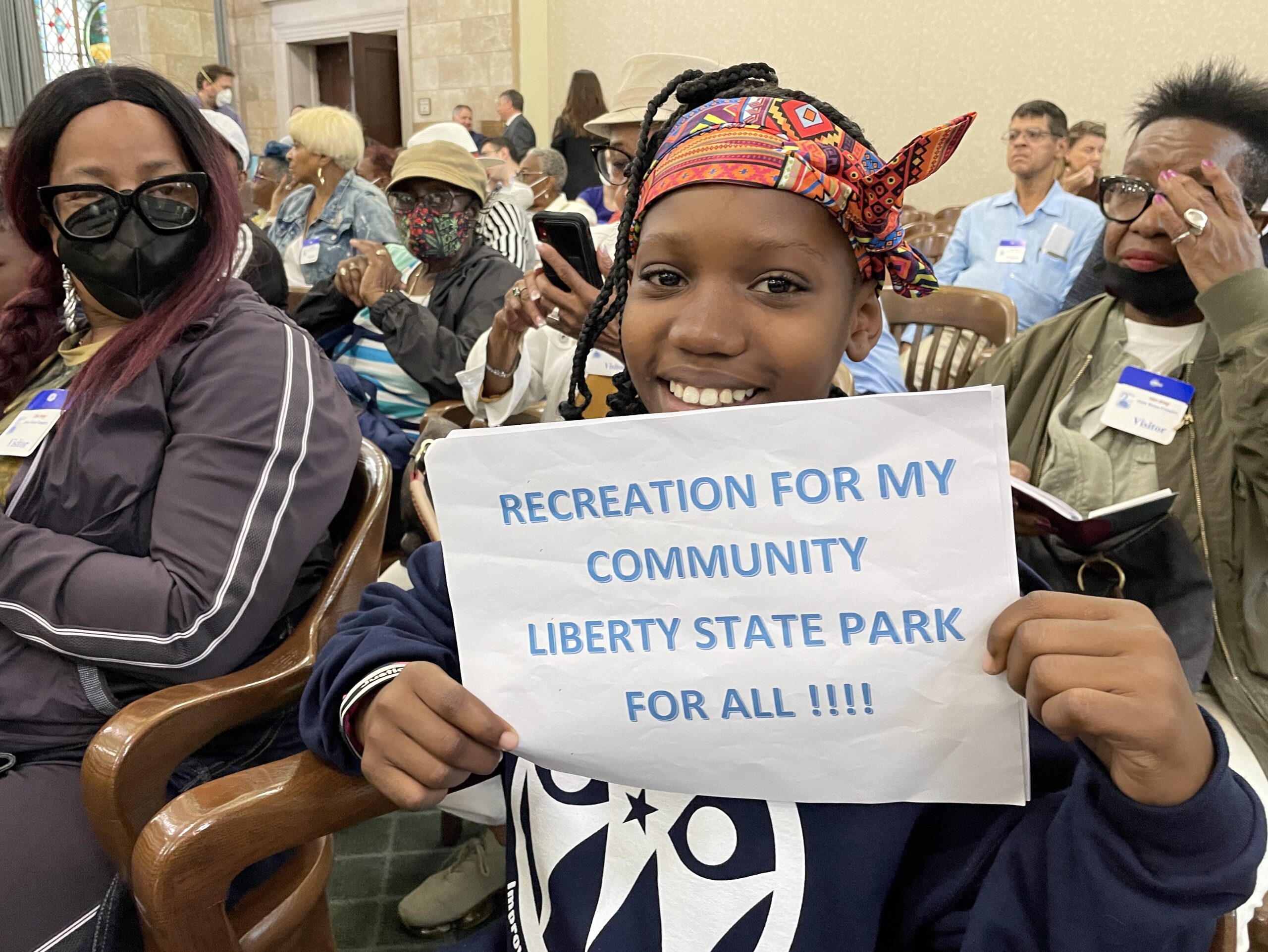 Jordyn Walker, 11, of Jersey City, was one of about 100 people who attended a public hearing at the Statehouse in Trenton on June 16, 2022, to learn more about a $250M plan that would open Liberty State Park up to commercial development. Photo credit: Dana DiFilippo/New Jersey Monitor

But the panel didn’t act to ban large-scale development like stadiums or protect an environmentally fragile peninsula known as Caven Point, leaving critics vowing to lobby legislators in the Assembly to do so.

Former Sierra Club of New Jersey director Jeff Tittel warned lawmakers the bill “has more holes in it than a golf course.”

“What we got today was window-dressing,” Tittel told the New Jersey Monitor after the hearing. “Large-scale development can still happen — and think about all the parking you’d need if you build an 8,000-seat soccer stadium and then fill up the infield. You’d have 12,000 people there. Think about how many cars that’ll be and traffic and how much land you’ll have to use for it. So it’s still a very bad bill that threatens Liberty State Park, a park that belongs to all of us.”

Stack kicked off the public hearing, challenging the plan’s critics from the get-go.

“I don’t think prohibiting ideas from even being considered is good democracy,” he said.

Stack agreed it was “a big number, even for Trenton.”

“But when you look at the years of neglect at the park, it’s only fair that we take care of this statewide jewel,” Stack said. “This isn’t a Hudson County park. It’s a statewide park and a statewide asset.” 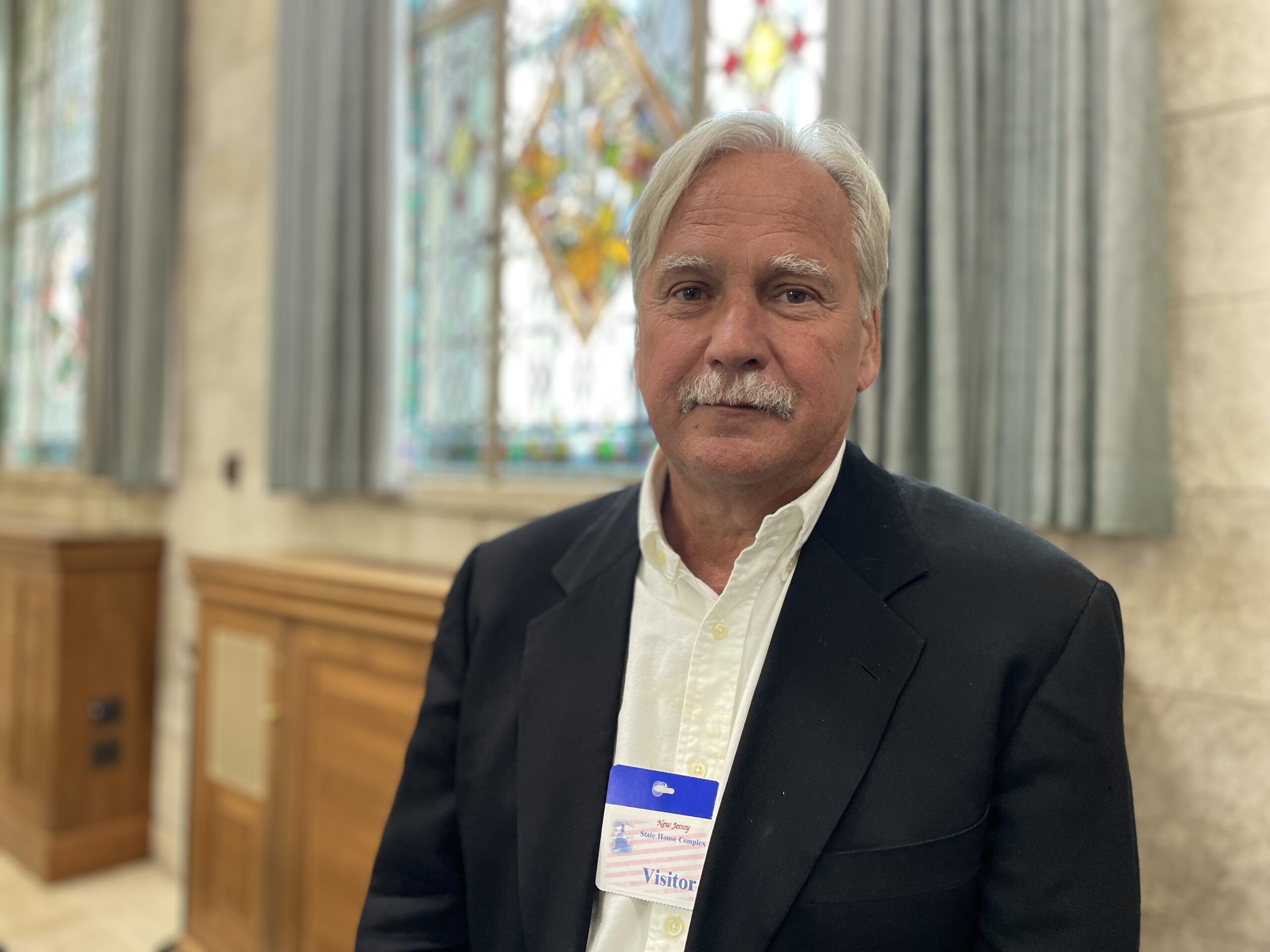 Urban designer Alan Mountjoy of the architecture firm NBBJ presented a wide-ranging plan for the park (he said he was hired last fall to prepare based on public meetings and surveys). He noted $250 million isn’t enough to complete everything in the plan.

The more controversial parts of the plan would develop 100 acres, including:

The plan also calls for environmental improvements to protect the park from flooding:

The committee heard from a steady stream of supporters and opponents. 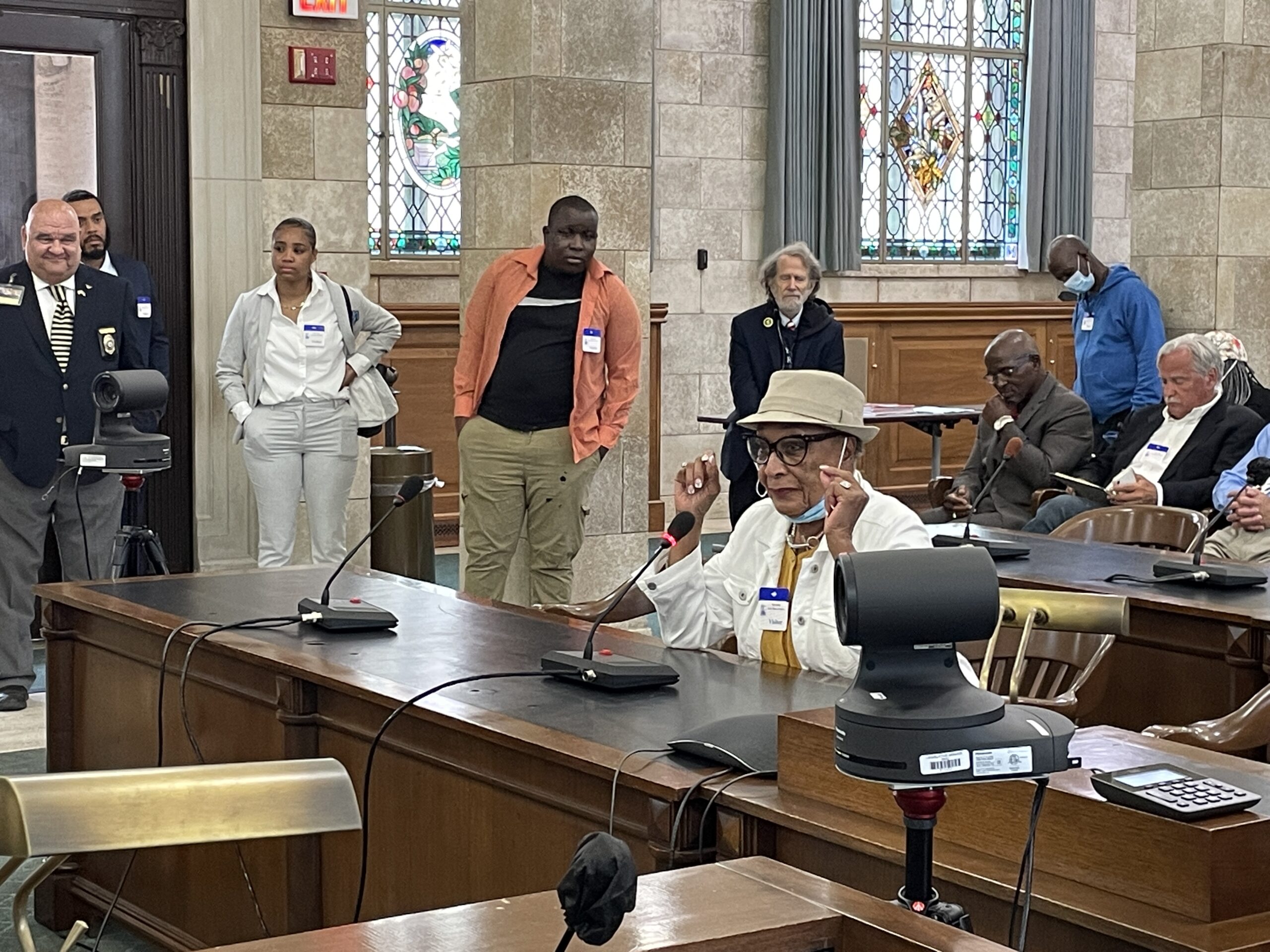 Shirley Rogers-Fields of Seniors on the Move testifies on June 16, 2022, in the Statehouse in Trenton in support of a controversial bill that would expand active recreation opportunities at Liberty State Park. Photo credit: Dana DiFilippo/New Jersey Monitor

Many supporters said the park, which draws about 5 million visitors a year, should provide local residents with more opportunities for active recreation, such as sports fields and swimming pools.

Joe Cossolini is a Jersey City police detective who heads the Jersey City Police Officers Benevolent Association and lives a half-mile from the park. He testified in support of the bill, with his young son beside him.

“My son here cannot ride his bike up to the corner because the area is very dangerous,” Cossolini said. “This is a life-or-death choice for some of these kids. They have nothing to do in that neighborhood. There’s nothing there for them to spend their recreation time safely.”

Shirley Rogers-Fields of Seniors on the Move says Liberty State Park plans should include recreational and social opportunities for older people too.

“We discussed the youth, but let’s discuss the seniors,” she said. “We have ideas!”

Critics reminded legislators that area residents have fought efforts to develop the park almost since it opened 46 years ago.

“Please listen to the decades of the public’s voice for the park for a multitude of free uses,” said Sam Pesin, president of Friends of Liberty State Park. “We urge you to do the right thing to ensure a Central Park-type urban oasis. We support this bill only if it includes language prohibiting large-scale commercialization and large-scale privatization.”

Pesin asked lawmakers to instead support another bill, called the Liberty State Park Preservation Act, that would restrict commercial development in the park. After the hearing, Sen. Bob Smith (D-Middlesex), the committee’s chair, told the New Jersey Monitor he would not advance that bill.

“This is a far superior approach to it,” Smith said. “It’s a serious attempt to get a great park and to make sure that it’s integrated with all of Hudson County’s needs. This will be a game changer, for the county and the state, and it’ll change the economy up there, too.”

The committee advanced the bill with several amendments that remove a requirement that the state Department of Environmental Protection devise ways for the park to generate revenue, bar a casino from opening in the park, ensure public input on the master plan before it is submitted, and more.

Committee members declined to amend the bill to specifically protect Caven Point. Fireman has previously proposed leasing that portion of the park and moving some of his golf course there.

“We’re going to leave that to the DEP,” Smith said.

Greg Remaud, CEO of NJ/NY Baykeeper, reminded legislators that no state environmental officials were at the hearing.

“The DEP hasn’t led this process from day one. DEP is following from the rear,” Remaud said. “So if they’re going to say, ‘hey, we’re the ones in charge of protecting resources and making decisions,’ then step up and do so.”

A spokesperson for the state Department of Environmental Protection could not be reached for comment. 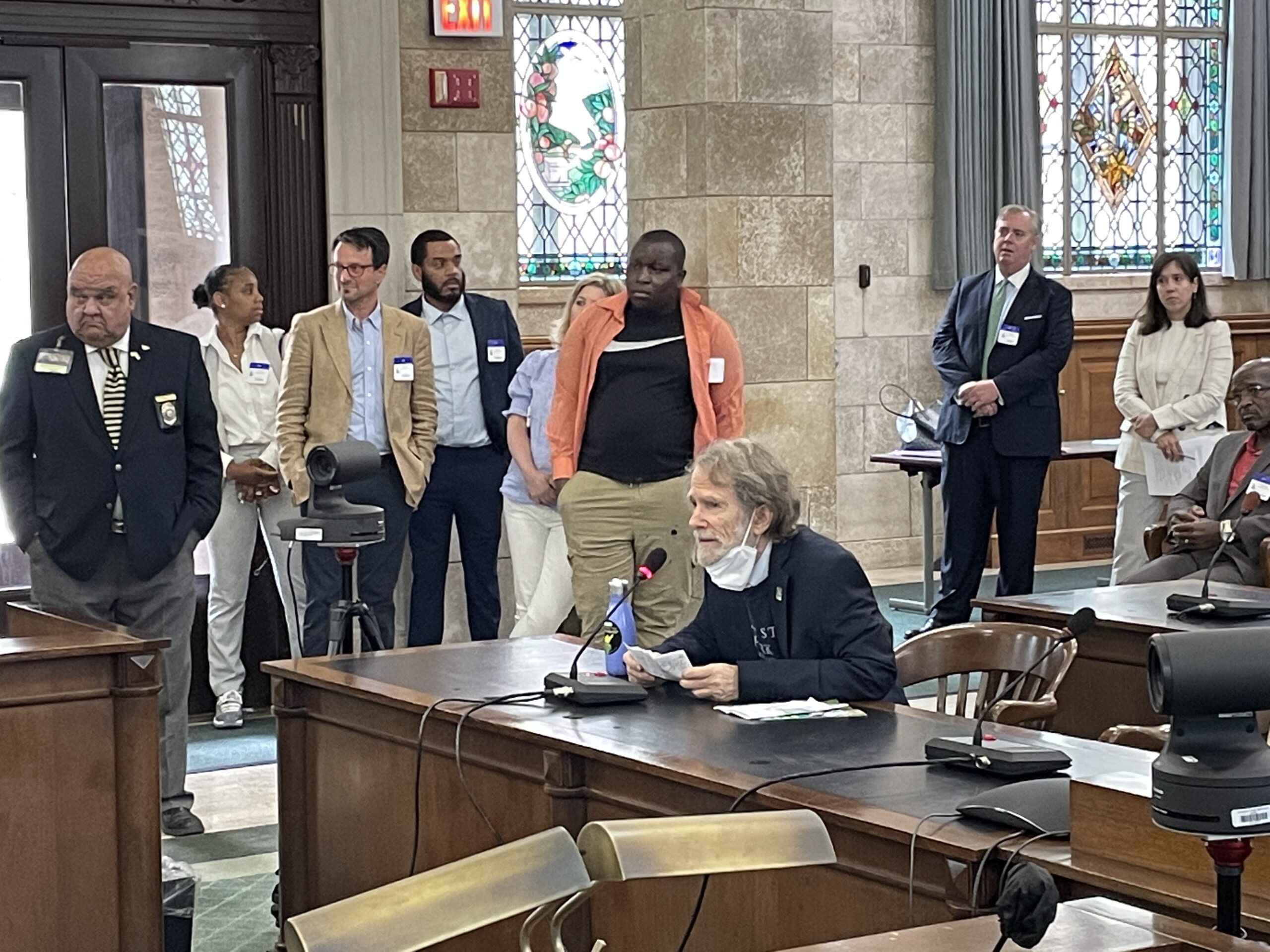 Sam Pesin, president of Friends of Liberty State Park, testifies on June 16, 2022, against a controversial bill that would allow development in the 1,200-acre park. Photo credit: Dana DiFilippo/New Jersey Monitor