Amid rising gas prices, more turn to cycling: Learn how to ride safely in Hudson County

HUDSON COUNTY, NJ — With gas prices at a record high and no relief in sight, many are reconsidering their options for transportation as a way to keep a little more cash in their pockets.

And while cycling is one of the best means for urban travel — efficient, affordable, equitable, healthy and environmentally friendly — the notion of hopping on a bike in a bustling place like Jersey City may be a bit nerve-wracking for some. 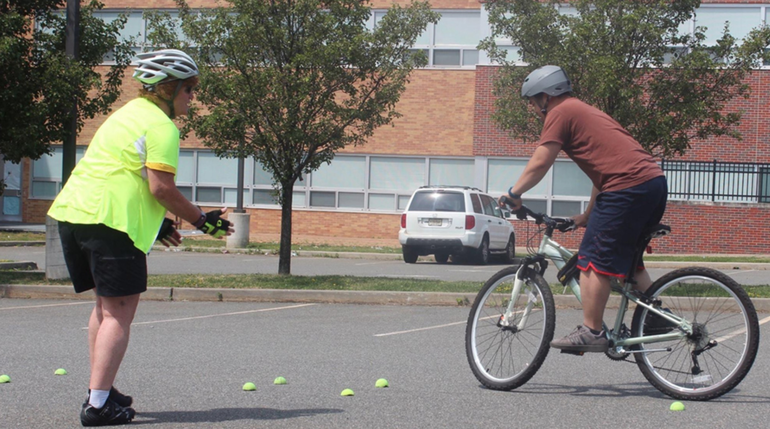 According to the New Jersey Department of Transportation (DOT), 70% of New Jerseyans say they do not regularly ride bicycles because they perceive drivers as “incautious” around bicyclists. Those same respondents also cited a lack of bike lanes and heavy traffic as the prime underlying reasons for why they do not feel safe on a bicycle.

Here’s where the Hudson Transportation Management Association (TMA) comes in.

As part of its ongoing mission to promote sustainable transportation, Hudson TMA offers free classes each year to adults who want to improve their cycling skills and gain more confidence riding in Hudson County.

During the class — which is a mix of classroom and on-street instruction — participants will learn about cycling safety, the rules of the road and the rights and responsibilities of cyclists from a certified instructor.

So far, Hudson TMA has scheduled one Adult Smart Cycling Class for this year (June 25 from 9 a.m. to 2 p.m.); however, Hudson TMA director Jay DiDomenico said “there is always a possibility” a second could be added. To register for Saturday’s class, click here.

He went on to say how worthwhile the class is for riders of all levels because it will teach them “how to ride safely and share the road in an urban environment.”

“Hudson County’s dense population can provide challenges for bike riders and we want to help them be better cyclists and alleviate any discomfort riding in our community,” said DiDomenico, who has been certified by the League of American Bicyclists to teach the class.

As a zero-emissions form of transportation, bicycling is an excellent way to create a more sustainable community. Using public transportation and walking instead of driving short distances are among the most direct ways the public can help solve the climate crisis.

The Adult Smart Cycling Class has been offered since 2006 by the Hudson TMA, which is a division of the Hudson County Improvement Authority (HCIA) that seeks to provide resources and tools to simplify travel, enhance the daily commute, improve safety and assist in lowering carbon emissions.

Across New Jersey, there are eight TMAs that are dedicated to reducing traffic congestion and improving mobility by promoting alternative community modes, such as mass transit, shuttles, carpooling programs and walking/biking options.

These non-profit, public-private partnerships regularly coordinate free programs on topics that align with Sustainable Jersey certification categories, such ones focused on bicycle and pedestrian safety and anti-idling awareness.

Hudson TMA postponed its Smart Cycling Class for the past two years due to the COVID-19 pandemic. And, during that time, the popularity of cycling boomed, prompting many cities to boost spending on bike infrastructure to capitalize on the trend.

Even before the onset of the pandemic, there were already efforts underway in Hudson County to become more bike-friendly, however.

As part of Vision Zero pledges — a campaign that aims to achieve zero traffic deaths and severe injuries — Jersey City and Hoboken have been working to redesign streets to be safer for bicyclists, pedestrians and drivers. Jersey City and Hoboken also have a joint bikeshare program and recently unveiled plans to connect existing bicycle lanes between the two.

In 2019, Jersey City approved the Let’s Ride JC: Bicycle Master Plan, which sets a vision for future development of bike lanes, bike infrastructure and bike safety initiatives over the next decade. A big part of that plan calls for the creation of a city-wide bicycle network that expands upon existing lanes and improves overall cycling safety.

Hoboken has also been praised for making biking a priority, rather than an afterthought, when it comes to planning. In 2012, Hoboken was designated a Bronze-level Bicycle Friendly Community by the American League of Cyclists.

DiDomenico said, “As bicycle infrastructure continues to expand in some of our towns, more people are using bikes as not only a secondary mode of transportation, but a primary one, as well.”

“The roads are for everyone and should support all types of travelers. Biking is a most sustainable option, but we want to be as safe as we can on the road,” he said. “Through our class, bicyclists learn the rules of the road, how to avoid crashes and ride defensively. It is our goal for our riders to be safe and ‘effective’ cyclists, riding predictably and confidently.”

Unfortunately, not all communities have streets designed with the pedestrian and cyclist safety and convenience in mind.

The lack of infrastructure not only poses a direct safety hazard to cyclists, but discourages more people from adopting the practice of using a bike for short- and medium-distance trips, like commuting, shopping or visiting friends.

Though New Jersey is trying to encourage bicycling as a main form of transportation by expanding bike lanes and upgrading existing pathways, less than 1% of people commute by bicycle, according to the DOT.

Why? Well, they simply don’t feel safe. Over 82% of Garden State residents said they’d be more comfortable with a separated bike lane, rather than a standard pavement-marked bicycle lane, the DOT says.

Upgrading current and future bike lanes to a higher standard would likely boost bicycle use across the state, ultimately helping reduce emissions in the transportation sector. In New Jersey, transportation accounts for nearly half of the state’s greenhouse gas emissions and is the largest contributor of local air pollution, which causes a host of health issues.

In lieu of those much-needed safety upgrades, the best thing a cyclist can do is ride smarter.

DiDomenico said, “The most common cause of a crash between motorists and bicyclists is the bicyclist riding on the wrong side of the road. Cyclists will be safer if they follow traffic laws.”

Amid rising gas prices, more turn to cycling: Learn how to ride safely in Hudson County