NEWARK, NJ — An initiative aimed to create green space in New Jersey’s most underserved communities by way of planting trees is finding great success in Newark by letting residents get in on the action.

The New Jersey Tree Foundation, through its Renaissance Trees Program, planted 83 trees across several communities in the Garden State this year, including Newark. Established in 2006 as a community-based reforestation effort in Newark, the program’s initial focus on bringing trees to Brick City has since expanded to several Northern and Central Jersey towns. Through tree planting, volunteerism and partnerships, the organization assists communities in improving their environment, and promoting sustainability and quality of life. 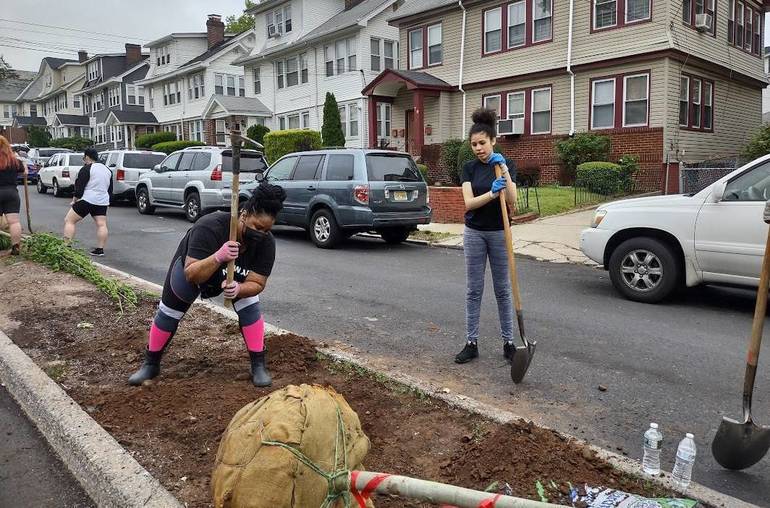 “This season, especially in Newark, was very community-based and really highlighted how our program works,” Renaissance Trees Program Director Crystal Wessel said. “Residents reach out to the NJ Tree Foundation to request trees for their neighborhood, and the [program] partners with resident volunteers to plan, plant and maintain trees—beautifying neighborhoods and improving the environment one block at a time.”

Since its inception, the program has resulted in 3,966 trees planted across the City of Newark and the removal of more than 21,974 square feet of concrete in an effort to improve stormwater management.

While volunteers through the program lead the way in planting each tree, the initiative caught the interest of several Newark residents. Wessel said the plantings are all community-based, so the initiative focuses on areas where residents have reached out to the program director, expressing interest in bringing more trees to their neighborhood. 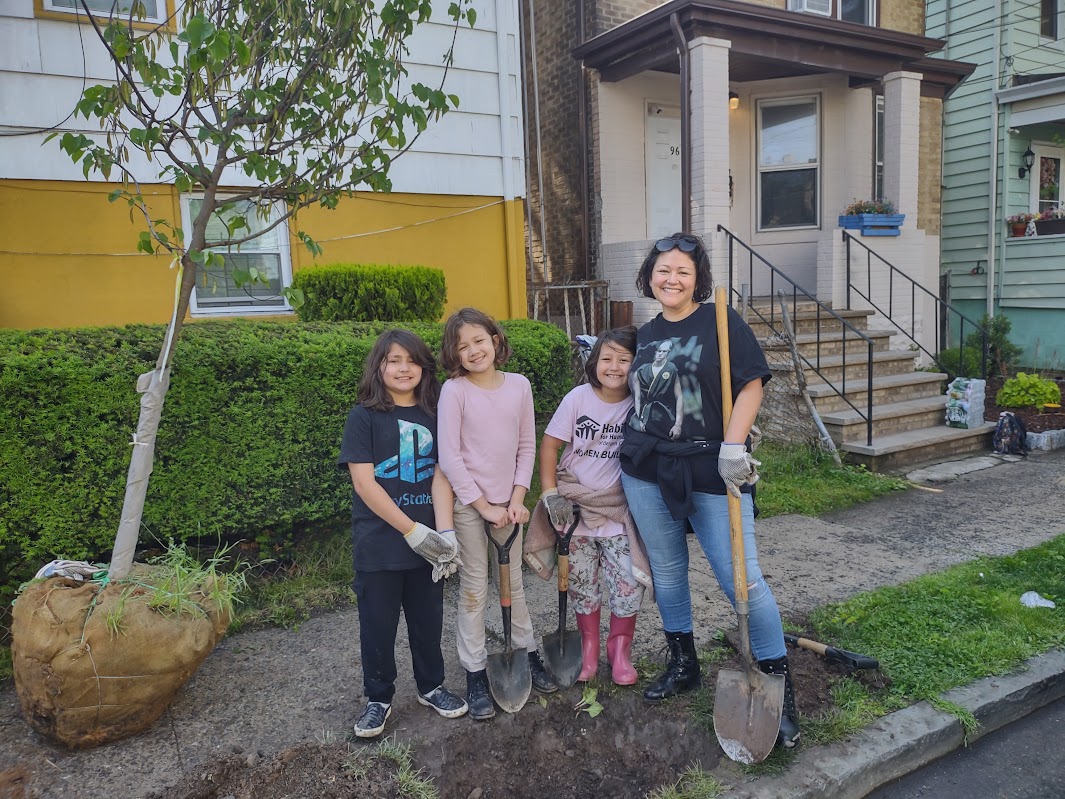 Residents request trees for their neighborhood from the NJ Tree Foundation, and the program partners with volunteers to plan, plant and maintain trees—beautifying neighborhoods and improving the environment.

At two Newark plantings this spring, Wessel said multiple residents in the area approached her to ask how they could get trees on their street.

“So we exchanged information, and now I’m working with them to plan future events,” she said.

The initiative’s community-based focus is part of the reason more residents are demanding trees, according to NJ Tree Foundation Executive Director Lisa Simms. Since the NJ Tree Foundation’s inception in 1998, Simms said the bulk of residential plantings come at the request of neighbors who have witnessed resident-led tree projects on nearby streets.

“The demand from residents is increasing, and that’s an encouraging sign that people are advocating to improve the health of their environment,” Simms said.

As more residents invest in more green space to beautify their neighborhoods, they’re making their community more sustainable, too.

This initiative is especially important in urban cities like Newark, which is America’s second worst “heat island” behind New Orleans, according to a report issued by Climate Central, a Princeton-based nonprofit research organization. A heat island is defined as an urbanized area that experiences higher temperatures than outlying areas due to an influx of structures such as buildings, roads and other infrastructure that absorbs and re-emits the sun’s heat more than a natural forest or large body of water would. 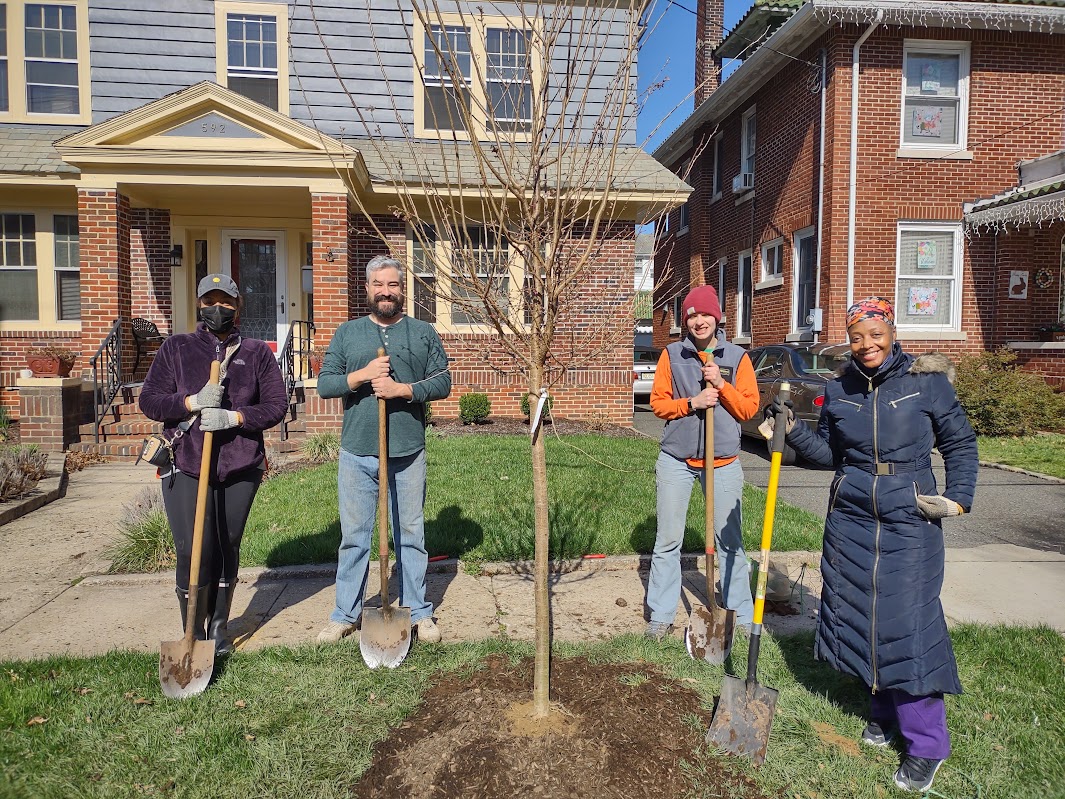 The bulk of residential plantings come at the request of neighbors who have witnessed resident-led tree projects on nearby streets.

Simms stressed the significance of having the Renaissance Trees Program to create more green space in urban communities like Newark.

“Trees carry enormous environmental benefits, from air filtration to stormwater absorption to temperature-regulating shade, and shade is critical in cities like Newark that suffer from the urban heat island effect,” she said.

Bringing more trees is also vital to a city like Newark, uniquely positioned at the center of major transportation hubs for air travel, trucking, and rails, plus a seaport. Due to Newark’s long history of industrialization and being located near these major transportation hubs, residents have been subject to high levels of air and water pollution for decades.

“With air and water pollution ongoing and climate change exacerbating flooding and urban heat, doing whatever we can to combat these issues is critical,” Wessel said. “Trees are a simple way to address all of these concerns while also improving the appearance of streets and bringing together communities.”

Promoting sustainability through tree plantings is appearing to work twofold. Wessel noted that tree planting events not only help to address environmental impacts but also give residents a tangible way to improve the environment and community.

During a tree planting event on Vassar Avenue, Wessel said that the effort has a special way of bringing people together: Residents turned the occasion into a block party-style celebration.

“The residents I worked with this spring helped with organizing food and music to bring even more people out, and I think that helped us to be able to reach residents who have never heard of us,” she said.

“The trees we plant are over 10 feet tall at the time of planting, and volunteers can see the impact their efforts have made immediately after planting,” she said. “Many of our volunteers have never planted a tree before, and our tree planting events demonstrate proper tree planting techniques and can give volunteers the confidence to plant trees in their own yards. Volunteers also learn about all the benefits that trees bring to the communities where they are planted.”

The initiative is open to other organizations and municipalities looking to bring more green space into their own neighborhoods. Newarkers interested in bringing trees to their neighborhood can email Wessel at cwessel@njtreefoundation, or call 609-439-1755.

To volunteer, email Wessel or sign up for the group’s email newsletter, where planting dates for the fall will be posted in September.

Wessel said anyone interested can reach the organization via email with any questions they have about starting a sustainable, community-based tree planting program. People can also attend the group’s upcoming TreeKeepers Training session, she said.

For more information about the summer 2022 TreeKeepers go to: https://njtrees.org/summer-2022-treekeepers-workshops/

Correction: an earlier version of this story mistakenly stated that 3,966 trees were planted across New Jersey. The story has been updated to reflect that 3,966 is the figure for tree plantings in the City of Newark.