What to do when you ‘spot’ a spotted lanternfly

What are spotted lanternflies?

Since 2018 there have been increasing reports of these insects invading New Jersey. Spotted lanternflies can feed on up to 70 native plants in the state, including fruit trees, grapevines and hardwood trees – specifically Tree of Heaven and Virginia creepers. 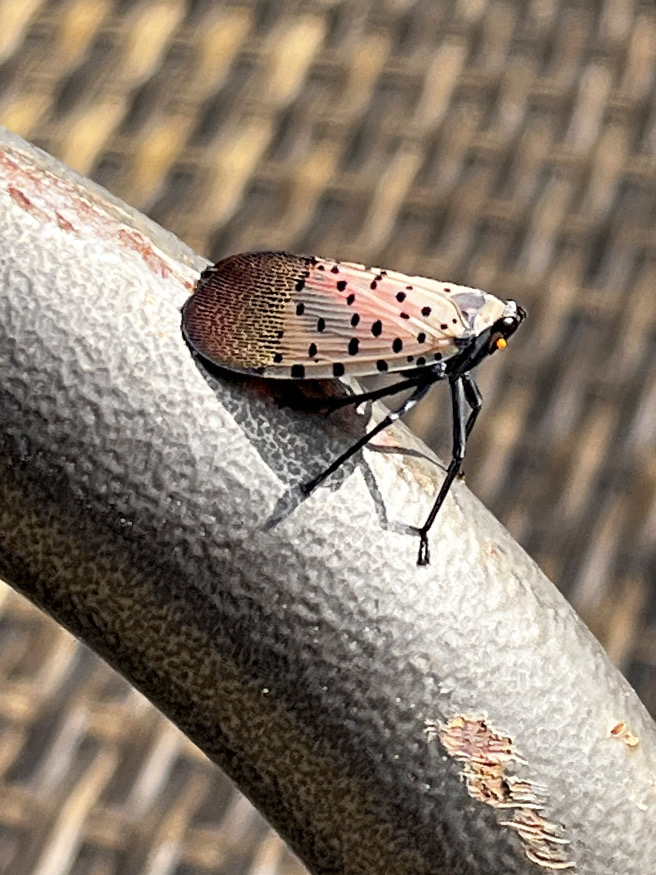 BUG OFF, PAL: While invasive, the spotted lanternfly poses little threat to humans or pets, but its suction mouth can damage fruit trees and a variety of native plants. Photo credit: Ryan Morrill

Luckily, spotted lanternflies do not seem interested in feeding on common vegetable plants in residents’ gardens or on pine trees.

Spotted lanternflies are an invasive species that originated in Asia and, according to the Rutgers Agricultural Experiment Station’s website, njaes.rutgers.edu, were first found in Pennsylvania in September 2014. Since then they have been crawling past state lines.

While these bugs are not necessarily harmful to humans or pets, they can threaten crops and agriculture with their suction mouths, which are designed for sucking the nutrients out of plants, making it more difficult for plants to survive through the winter. This sucking can also do damage by lessening the fruit yields a crop would typically produce. After the lanternflies eat the sap or other nutrients from plants, they defecate their honeydew back on plants below, which causes a mold.

The good news about these bugs is that they are not known for infesting homes, carrying diseases, stinging or biting. However, the fact that they do not bite can make it harder to locate plants they might be harming. According to Susan Emherdt-Servidio, horticulturist and Rutgers Master Gardener program coordinator, the best way to conclude that spotted lanternflies have invested a specific tree is to look for a wet-looking sap on the bark.

Another sign that spotted lanternflies have made a plant their feeding ground is to check for any eggs that may have been laid there. According to the Rutgers Agricultural Experiment Station’s website, spotted lanternfly egg masses resemble a pile of mud on smooth surfaces. October is the most common time for egg masses to start appearing.

While New Jersey is not home to any natural predators of the spotted lanternfly, some of our wildlife is becoming curious about what these new bugs are. However, they are not a sustaining food source for any native or non-native birds just yet. Researchers have also found that feeding on Tree of Heaven – one of the bug’s favorite feeding grounds – actually makes lanternflies not taste as good to any birds that would be interested in snacking on a spotted lanternfly. 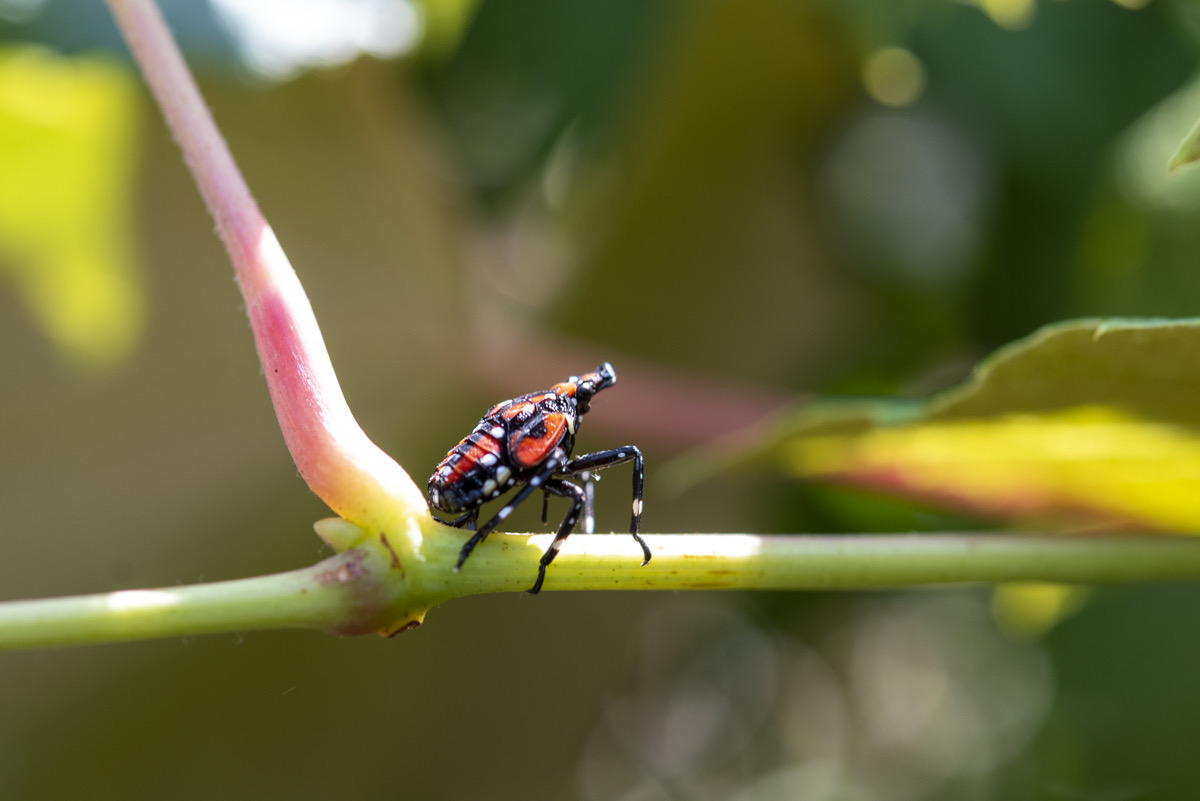 How to help resolve the issue

The best way for residents to combat spotted lanternflies infesting their gardens is to kill any they may see, whether they are on the ground or on plants. It is important to note these bugs are incredibly good jumpers, and once they have matured into adults with wings, they can fly as well. So it is recommended to check the surrounding area, even after the initial squash.

According to both the N.J. Department of Agriculture and the Rutgers Cooperative Extension program, several counties have been placed under quarantine to eliminate the spread of the invasive species – Burlington, Camden, Gloucester, Hunterdon, Mercer, Salem, Somerset and Warren. Before leaving home, residents of these counties are required to go through a checklist of potential hiding places for spotted lanternflies or their eggs. The checklist, available at state.nj.us/agriculture/, is also crucial for anyone planning on moving out of these counties, especially if they plan on crossing state lines.

As of now, there is no pesticide that attacks strictly the spotted lanternfly. While residents can use some pesticides to combat these bugs, it is crucial to read the labels and warnings very carefully before applying these chemicals anywhere. This is not the preferred course of action, since these chemicals can harm other bugs that residents may not be targeting, such as bees and the monarch butterfly; the latter recently made its debut on the endangered species list.

Rather than using harsh pesticides, some residents have resorted to sticking glue traps or sticky bands on their trees in hope of capturing some spotted lanternflies. The best place to set up a trap on a tree is about chest height or higher, since the spotted lanternflies typically climb or fly up a tree, but mainly fall back down.

“The big warning with the sticky bands, or glue boards, is to put a wildlife barrier over it,” Emherdt-Servidio recommends, “in other words, putting up some kind of screen or something that can help protect the non-targeted insects.”

Educating residents has been the course of action taken by Rutgers Cooperative Extension program, as it has uploaded many videos and articles specifically about spotted lanternflies, how to spot them, their life cycle and the most recommended ways to get rid of them. Their goal is to disseminate the research conducted by Rutgers and Penn State for ways that best grab the community’s attention, which so far has been through posting videos on their social media pages.

There have also been numerous Facebook groups started with the intention of spreading awareness. These groups are helpful for neighborhood gardeners and concerned residents to reach out to one another and ask questions and get advice. 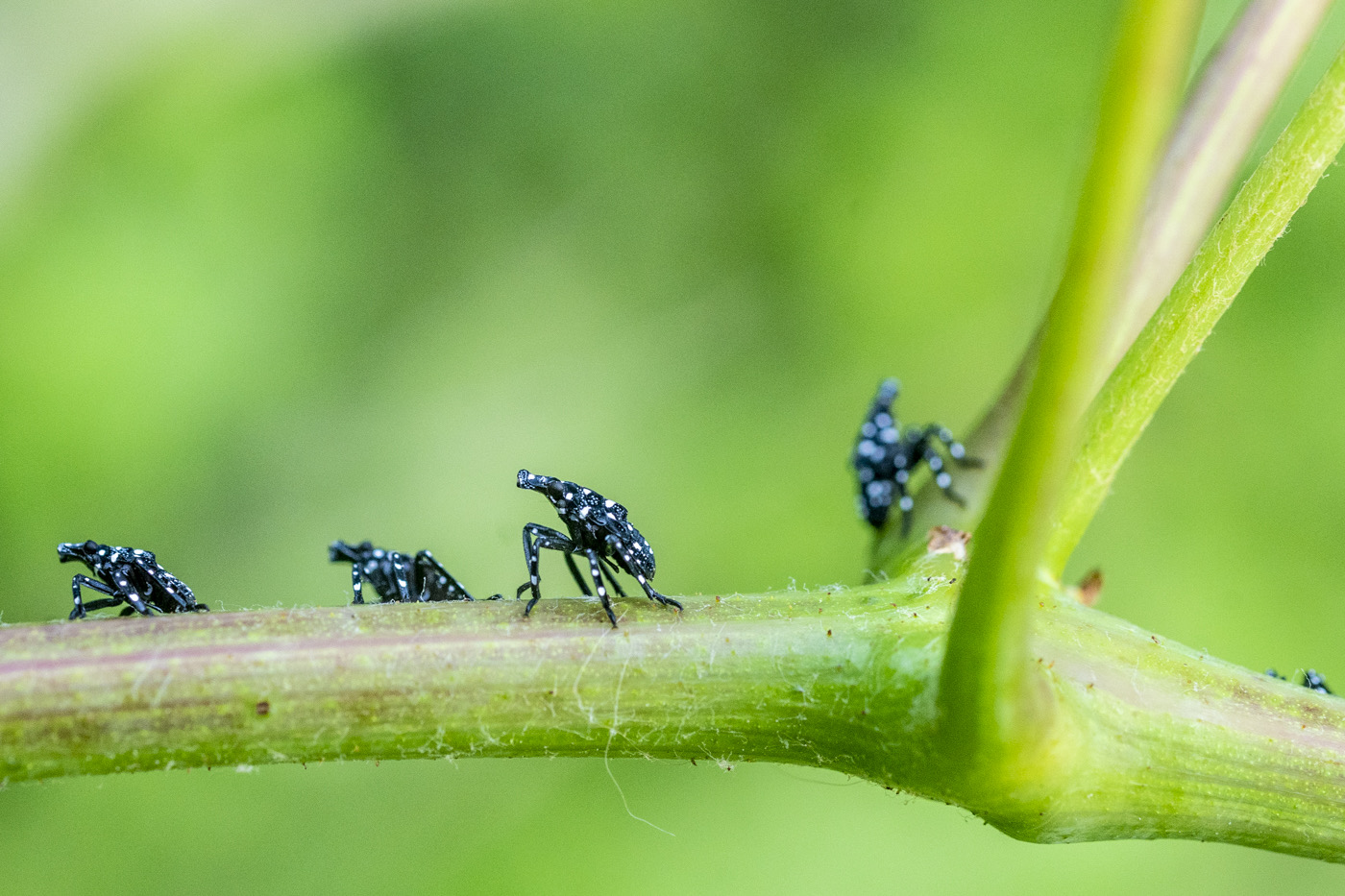 This story was co-produced in collaboration with CivicStory (http://www.civicstory.org) and the NJ Sustainability Reporting project (SRhub.org)

What to do when you ‘spot’ a spotted lanternfly