NEWARK, NJ — An urban garden nestled behind the St. Benedict’s Preparatory School building is cultivating a path for students to lead Newark towards a more sustainable future.

Among the beds of tomatoes, bell peppers, cucumbers and more, the garden serves more than one purpose. The garden is a year-round enterprise run by St. Benedict’s students who manage and tend to the green space and take classes in entrepreneurship and gardening, and/or participate in the school’s Gardening Club. From there, students can learn a variety of things from how to nurture seedlings in hydroponic tables to establishing a sustainable business model that aims to raise revenue. 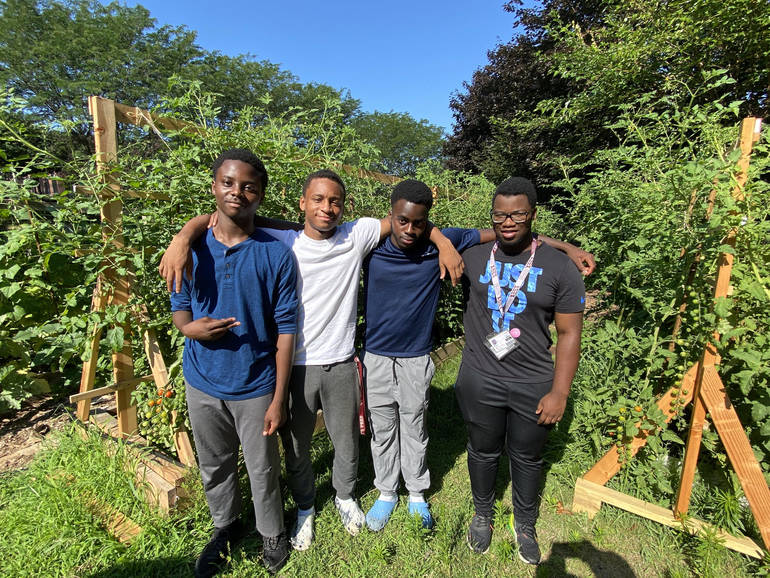 “It brings a really good diverse palate of things you can do in our community,” said Donson Akhibi, a junior student at St. Benedict’s Prep who works in the garden. “It also gives an opportunity to students who aren’t used to this stuff to get a chance to learn about it. And it helps people who might have a passion for this but don’t have access to it.”

By giving students a chance to discover their green thumb, they can also discover new ways to give back to their community. Their lessons in entrepreneurship help them develop plans to reinvest in the garden and grow more food for a city that was designated as a “food desert” earlier this year, an area defined as having limited access to fresh, nutritional foods for its residents.

“The goal is to give wholesome, cost-effective food to St. Benedict’s Prep and to the Newark community,” said Susanne Mueller, a history teacher at St. Benedict’s Prep who is a co-moderator of the garden. “As a school we have this once unused space now as a useful learning space, but from a community perspective, it’s a benefit.”

Fr. Maximilian Buonocore, a teacher at St. Benedict’s and co-moderator of the garden, said the green space is also a useful tool for students to understand where their food comes from.

“They learn if the food they’re eating is healthy and what is healthy food,” Buonocore said. “You can spend your life just buying food from a store, but to be able to grow your own food is something I see great value in.” 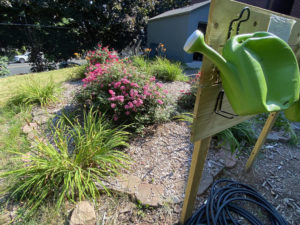 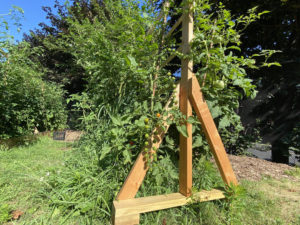 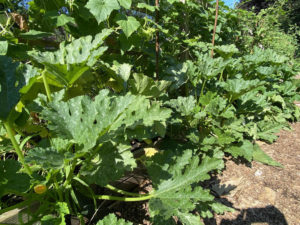 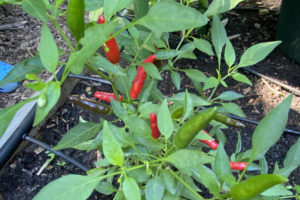 Mueller explained that the garden originated from humble beginnings prior to becoming the multifaceted operation that it is today. The idea for having a garden on campus was spearheaded in 2008 by Noreen Connolly, a teacher at the school, who transformed part of an area behind the school into a garden to grow plants. The idea tied into the school’s Spring Phase projects, which encourage students to step away from their desks and experience hands-on learning initiatives.

The garden has expanded each year since, encompassing about 1,800 square feet of growing beds and an indoor growing operation. As the garden grew in size, so did potential new learning opportunities.

Mueller said that during the coronavirus pandemic, an idea was born to turn the garden into more than just a project. Her students, she said, wanted it to become a business to benefit the community year-round. From there, she said the students came up with a mission, business plan and a logo to turn the garden into the Gray Bee Garden Club, aptly named after the school’s mascot.

“Kids signed up and kept it going all the way through the end of the fall last year,” Mueller said. “We expanded it. We added more beds, and now we’re going to three growing seasons so that we keep planting and selling.”

In order to connect residents to the locally grown produce at St. Benedict’s, the school works in tandem with Urban Agriculture Cooperative, a nonprofit that advocates for combating food poverty by bringing farmer’s markets and fresh foods to urban communities, by selling through its website. In addition, students sell produce at farmer’s markets hosted on campus. The school also donates produce to a local food pantry.

Students tending to the garden have made the most of the learning initiative, too. The garden helps provides life skills that students can take home with them to show their family members, hopefully, how to grow their own food in becoming a more sustainable, self-reliant community.

“I have learned to appreciate food more because once I started working on the garden last year, I started my own garden at home,” said one student, Mitchell Ojo, who works in the garden. “It’s nice to watch things grow, and I’ve been eating more healthy produce.”

During a hot summer day, Mitchell was joined by several other students who took a pause from their work in the garden to catch some shade beneath a tree. There, they reflected on the impacts of caring for the green space.

“I like watching how food grows from one small thing into huge produce. I love food, so it’s cool to see,” said Kwashawn Gilchrist.

“I like being able to see what we’ve grown come from the ground straight up and how we’re able to sell it and watch people enjoy it,” added Kevin Anderson.

The garden also encourages various sustainable practices such as efficient irrigation systems, composting, and its ability to attract pollinators such as bees and butterflies to an urban area. Buonocore said he has even seen wildlife, both pests and welcomed guests, visit the garden including Cedar waxwings, raccoons, and woodchucks.

The St. Benedict’s staff hopes the school’s urban garden can become a model to other Newark schools to promote sustainability in the community. Ideally, most schools should strive to provide a garden of some sort to students to be incorporated into their education, but having a garden comes at the cost of thousands of dollars in seedlings, infrastructure, and garden equipment. At St. Benedict’s the school earmarks dollars in its budget to fund the project in addition to receiving grant monies and donations.

Mueller noted that even if most Newark schools can’t carry out a large-scale operation, there are several steps schools can take to implement sustainable practices on a smaller scale, such as hydroponic tables and growing tables.

She noted that her students have even pitched the idea of hosting conferences for other school officials in the area to attend, allowing them to connect and exchange ideas to see how they can replicate ideas from St. Benedict’s urban garden.

“Could a school have one to three growing beds? Yes. Can we teach somebody how to do that? Absolutely,” she said.