Reducing Textile Waste Is A Priority

“There’s a lot of things that we can recycle or just keep out of the landfill, and I think textiles are one of those things that people should think about because there are some better alternatives than just throwing things away,” Hammonton Green Committee Chair Amy Menzel said. 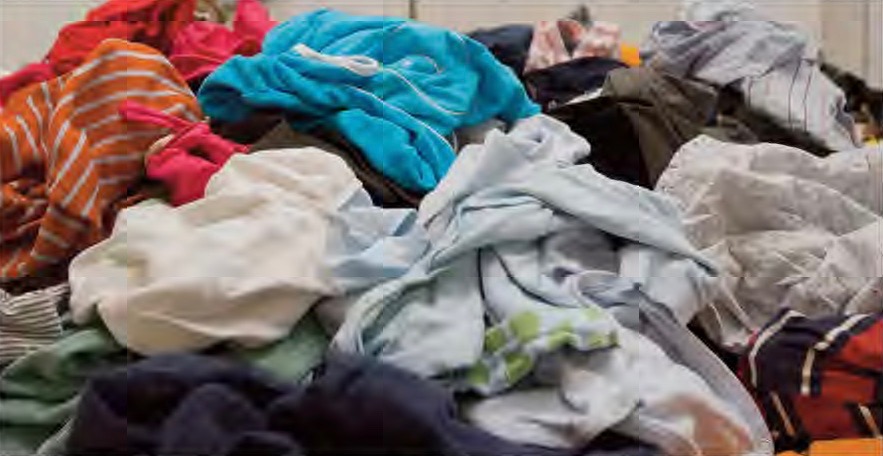 Along with clothing, towels and blankets also contribute to textile waste.

“Some animal shelters will take things like towels and old blankets, so there are a number of opportunities for people [to reduce textile waste] and a lot of them are really easy. There’s drop boxes you see in parking lots for different organizations,” Menzel said.

Some ways to reduce textile waste includes donating items and shopping from consignment shops or Goodwill.

“I love Goodwill. I call it ‘Greatwill’ because it’s so good! There’s so many different things there and not just clothing. You can find housewares and things for your home, and they also have a recycling program for electronics,” Menzel said.

About 70 percent of Menzel’s wardrobe comes from the thrift store.

“I always loved getting hand-me-downs even as a kid, so I like the fact that somebody else wore these clothes before me,” Menzel said.

Kristi Schleyer said she’s been thrifting since she was a kid.

“My mom was a teen mom, and I grew up in a house with my aunts and uncles. My mom was one of six, so there were a lot of people in the house and not a lot of money to go around. So basically the idea of hand-me-downs was there,” Schleyer said.

Now that she’s a mom working full-time with three kids, an 11-year-old and 9-year- old twins, it can be hard to find time to thrift but she enjoys it.

“I’m actually trying to teach my kids the same kind of thing even to donate stuff to places and help like we just went through all our winter coats and there’s a coat drive in Hammonton going on,” Schleyer said.

“Sometimes when the kids have to dress up for things, I go to a consignment shop or Goodwill like if they have Jersey Day or something like that. It’s so much cheaper. Kids grow out of things quickly, so it’s so much cheaper to find something there,” Schleyer said.

Along with shopping, Schleyer also donates clothing or gives them away to friends in her Mom Circle.

“My kids’ stuff, I have NorthFace coats, they’re only using those coats for a few months out of the whole year and maybe one year they don’t even fit in them, so there’s still a lot of life left in those kinds of things,” Schleyer said.

Mark Boyd, CEO of Goodwill Industries of South Jersey and Philadelphia, said “reduce, reuse, recycle” is one of Goodwill’s slogans since it was founded in 1902.

“I would say we’re probably one of the original recyclers and we’ve been doing it a long time,” Boyd said.

When people donate clothes to Goodwill, workers go through the items and determine whether an item is good enough for the store floor.

“If they decided it’s not good enough, that goes to our salvage operation. There we do sell clothing overseas, but we also sell to recyclers who utilize the fibers in those textiles for a variety of uses from making blankets to making insulation. Pretty much 100 percent of all textiles that come to Goodwill end up being reused in some way,” Boyd said.

By salvaging clothes, it keeps textiles “out of the waste stream.”

Goodwill also has a big sale every Sunday where items that have been on the sales floor for about four weeks go on sale for $1.

“[November 7], I believe we sold about 95,000 units just on that one day. Mostly clothing, probably 60 percent of it was clothing. That’s a big reuse success,” Boyd said.

Normally, according to Boyd, Goodwill usually sells around 15,000 units of clothing a day and another 13,000 units of housewares.

During the COVID-19 pandemic in 2020, Goodwill received record-setting donations.

“The COVID year was an unusual year for Goodwill. I appreciate the Governor of New Jersey and Pennsylvania allowed us to keep our donation doors open, so we accumulated a massive amount of donations. About 650 tractor trailer loads of donations we acquired during those three months when we were closed. Nothing has ever matched that intensity and that volume, but I would say that we’re doing very strong in donations. I always need more, but I don’t know if we’ll ever match what we did during the COVID year,” Boyd said.

Another way to reduce textile waste is by shopping secondhand clothing on apps like Poshmark.

Debra Shain said she uses Poshmark about once a month.

“I really like Poshmark because a lot of stuff that I buy from there are within a year from the time it was out at the actual store. The prices are just so good and sometimes it’s like a fourth of what you would pay retail,” Shain said.

At first, Shain was hesitant to use apps, but now she enjoys it.

“I didn’t like use any of these apps until two years ago. Somebody told me about it, and I was like, ‘Oh, let me check it out,’” Shain said.

“I looked and I was like, ‘Wow, these are some of the same things that I just seen in the high-end store like months ago,’” Shain said.

According to Woolly Green’s website, “the average American consumer purchases one new item of clothing every 5.5 days. That’s 5.5 items of clothing per month, or 66 items per year.”

“We’re just as a culture, we’re very wasteful. There’s a lot of stuff that we just use a few times and toss away without really thinking about what goes into making it and how our purchasing affects other people whether it’s the people who are making it or the disposal end, what happens to our waste after we toss it out?” Menzel said.

Fast fashion, cheap clothing that is mass produced at a low cost, contributes to the large amount of textile waste.

“A lot of times people are happy to see something that’s really inexpensive, but I think we have to stop and think about how that’s possible,” Menzel said.

Fast fashion being produced overseas “may not have the same labor practices and precautions to keep workers safe,” Menzel said.

“A lot of times people are working for very low wages and conditions that may be unsafe, and that’s how those clothes are so cheap,” Menzel said.

Menzel suggested buying items with the “Made in America” tag and shopping from local businesses.

“We got all kinds of good local businesses and supporting them is supporting people in our community, but also there’s all these great thrift stores and it’s a lot of fun to go look for treasures there. You can find some great things, and we have places in Hammonton where you can do that,” Menzel said.

This story was produced in collaboration with CivicStory (CivicStory.org) and the New Jersey Sustainability Reporting Hub project (SRhub.org). It was originally reported by Kristin Guglietti for The Hammonton Gazette, and may be re-distributed through the Creative Commons License, with attribution.

Reducing Textile Waste Is A Priority