But the lines keep getting longer as the level of need in Montclair continues to grow, Mustafa said. And the farm is left to find solutions—partnering with other farms, offering free food coupons and educating youth about food issues. 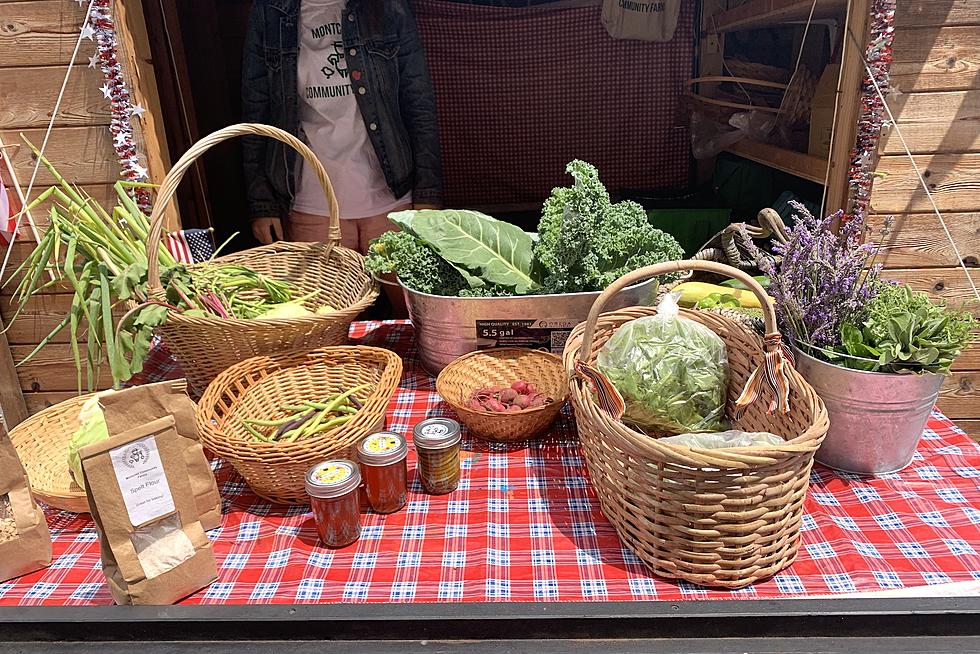 Founded in 2011, Montclair Community Farms has worked to distribute locally grown produce to the community for over a decade. In 2015, the organization launched the mobile farm stand—a transportable shed from which farm workers and volunteers sell discounted produce in Montclair and surrounding towns.

Since the farm stand’s creation, it has become a “beacon in the community,” Mustafa said.

Especially to those it serves. On Fridays from June to October the stand visits senior housing facilities in Montclair—PineRidge of Montclair and First Montclair House—to sell discounted, fresh produce.

In January, the New Jersey Economic Development Authority classified part of Montclair as a food desert. The area includes much of Montclair’s Fourth Ward, though not all of it, and parts of it extend into other wards as well. Both PineRidge and First Montclair House are located in the designated area.

Farm stand business “has grown exponentially over the last couple years, and it’s just a reflection of what the community needs,” Mustafa said. “People are struggling, they’re looking for affordable access to food, there’s no denying it.” 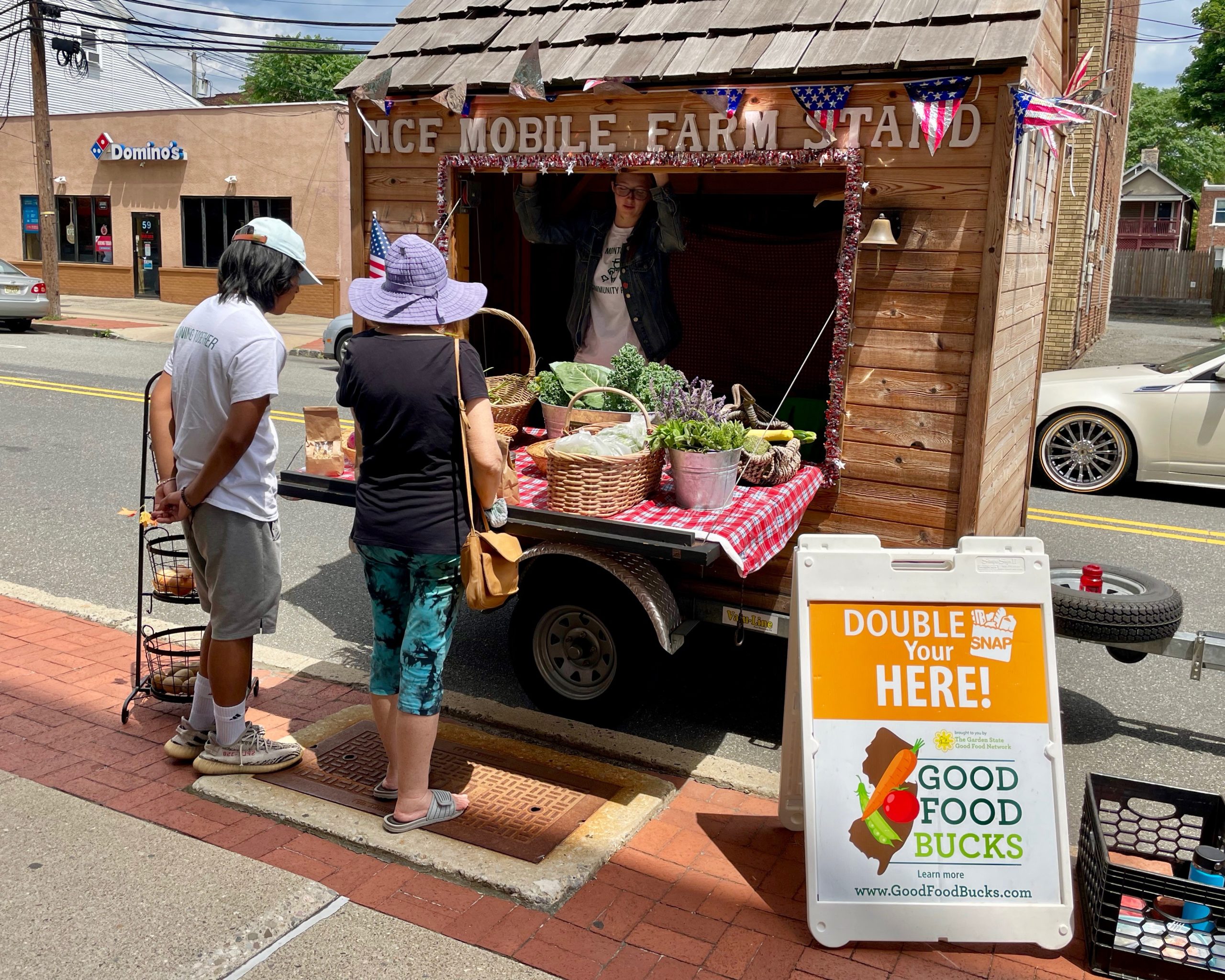 The farm accepts Electronic Benefits Transfer payments for its produce through the Supplemental Nutrition Assistance Program (SNAP). In 2020, the stand processed fewer than 20 EBT transactions. In 2021, there were over 60.

This year, the farm also helped to distribute $30 food vouchers for seniors in town—46 seniors applied for the program and more continue to express interest, Mustafa said.

“We’ve just been trying to support the community as much as possible,” she said.

Elena Lopez, a resident of PineRidge of Montclair, said she has been visiting the farm stand for a few years and loves the fresh produce.

“Everything I have gotten is great,” Lopez said. “But the lettuce is absolutely tremendous.”

She gets most of her groceries delivered from ShopRite, but said she’s not fond of the system—the items she orders often get substituted out for food she doesn’t want.

But with the farm stand, Lopez knows exactly what she’s getting and what she can make with it.

“I make a salad with radishes, tomatoes, cucumbers, olives, and if I have cold cuts, there’ll be turkey slices cut up and a little bit of a dressing,” she said.

“What I’ve noticed over the last five years is that the farm stand has really cultivated community at these senior housing centers,” she said. “They’re being offered amazing, locally grown affordable produce, but there’s also a certain level of connection and interaction that’s happening.” Debi Taffet, a self-proclaimed “farm stand addict,” didn’t need any produce when she visited the stand at PineRidge on Friday. But she lives in the area, so she stopped by.

Taffet has visited the mobile farm stand at different stops around town for the past three years. She’s a longtime supporter of buying local and has been shopping at farms in one way or another for the past 30 years, she said.

“I love when I don’t have to go to the supermarket for any vegetables, and it’s always a really hard landing when I have to go back,” Taffet said. “There’s nothing like fresh and locally grown.”

Mustafa and her team look at what typical farmers markets in the area are charging for produce and then set their prices lower, she said. They also put a lot of thought into how to best meet the needs of their senior shoppers.

“Most of our seniors shop in small quantities, so we grow and package things to meet their needs,” she said.

When thinking about what to plant each year, the farm opts for miniature varieties. For example, the farm grew Salanova lettuce this year instead of romaine lettuce because Salanova is sized for one or two people and won’t leave leftovers.

But even though the farm grows a lot for a small community garden—nearly 4,000 pounds of produce last year—it can’t keep up with the community’s needs, Mustafa said.

So the farm stand features produce from other organizations, including the Montclair Food Co-op & CSA and Ethos Primary Care, a medical practice in Long Valley that also maintains a 342-acre farm.

And the farm looks for help wherever it can get it. This summer the gardens are being maintained and harvested by AmeriCorps interns from Montclair State University, “farmpreneurs” funded by a U.S. Department of Agriculture grant and others. Montclair Community Farms relies on the help of AmeriCorps interns from Montclair State University, “farmpreneurs” funded by a U.S. Department of Agriculture grant, and others. Photo credit: Jennie Aylward

Farmpreneur Trynity MatosJames, a senior at West Orange High School, met Mustafa when the farm director visited her school. As a member of her high school’s culinary program, MatosJames was interested in learning more about growing and harvesting food, plus the farm schedule worked with her marching band schedule.

But MatosJames also plans to major in psychology in college and wants to explore the connections between food and mental health.

“I think that a lot of mental health issues stem from poor access to food and not getting enough food,” she said.

Farmpreneur Joshua Reed also met Mustafa when she visited his school, Orange High School. When it was Reed’s turn to help run the farm stand earlier in the summer (farmpreneurs take turns traveling around town with the stand), his eyes were opened to the level of need in Montclair.

“I thought everybody in this town was just set; that’s not true at all,” he said.

He said he realized seniors in Montclair didn’t all have access to fresh produce and that many of the stand’s customers used government assistance to purchase their produce.

“I can just wake up, walk to the kitchen, grab some food, relax and eat what I want,” Reed said. “There are some people who wake up and don’t know what they’re going to eat or are trying to figure out how they’re going to pay this or pay that. It’s a sad reality.”